There was war, and thereafter no more Indians troubled The Street.

At some future point I hope we can have an issue of the Arkham Gazette that focuses on the Native American people of New England, not only how they might serve a role in Lovecraftian gaming, but highlighting their history and culture independent of the English colonists through whom nearly all our knowledge comes.  Today I thought we might look at the singular most important crisis in the relationship between New England’s Native peoples and the English colonists who would almost entirely replace them within a handful of generations – King Philip’s War.

There is not the time or space here (or the expertise on my part) to go into the details of what we refer to as King Philip’s War.  Wikipedia’s entry on it does a serviceable job; my go to reference is Schultz and Tougias’ King Philip’s War, which I bought mostly because much the book is a geographic overview and selection primary source material, not because it is the clearest history.  This is a case in which I would not recommend looking at the sorts of books you might find via Project Gutenberg or Archive.org though, as 19th century accounts are, at best, triumphalist and paternalistic and, at worst baldly, racist.  Perhaps most damningly, they tend to get the details wrong even if they get the general course of events correct, most often by focusing on the war as a traditional military campaign rather than as a sociological, demographic, economic, and cultural collision.

The demographic and economic trajectories of the English and the Natives were moving in opposite directions by the mid-17th century.  The English colonies were

growing and expanding rapidly (population doubling every 25 years) with new settlements expanding outwards from Plymouth to most of the coast of what is now Massachusetts, Rhode Island, Connecticut, and New Hampshire with increasingly numbers moving into the interior, in a ring around Boston and along the banks of the Connecticut River.  The Great Migration (1620-40) of Puritans out of England resulted in roughly 20,000 colonists arriving in Plymouth, the Massachusetts Bay Colony, the Connecticut Colonies, etc.  The demand for new land was strong and only increasing.  Simultaneously, the Native peoples were still suffering the effects of the introduction of European diseases, which was had reduced their population significantly – estimates of 75% or higher are typical.  Remember that the Pilgrims found no one living at Plymouth when they arrived – this was why.  It was these demographic forces that fueled the conflict between the English and Native American people of southern New England, but it would be cultural and social forces that guided the nature and impact of the war to come.

The Course of the War:

This was not the first significant armed conflict between the English colonists and the Native tribes of what the newcomers called New England – in what is now Connecticut the Pequot War (1636-38) had resulted in the effective elimination of the Pequot nation for example.  Small scale violence between colonists and Natives was not unknown but was restricted and controlled by the colonial and Native authorities as both parties saw it as undesirable.  Increasingly however, the mutually beneficial relationship between the Plymouth colony and the Wampanoag people (they had been allies against the Pequot a generation before) soured.  The colonists grew to regard the Wampanoag people (and other Natives) not as nations to be negotiated with as a dependent group that needed to be corralled and cajoled into obedience.  On the Native side, the English became regarded not as just a new, relatively hapless group, that could be useful against other tribes, but as an existential threat to the Native peoples  as a whole.  Even when they were not buying or seizing Native lands, the ongoing missionary effort had created whole communities of Christian converts whose loyalties were to their coreligionists and not the Wampanoag, Narragansett, or Massachuset. 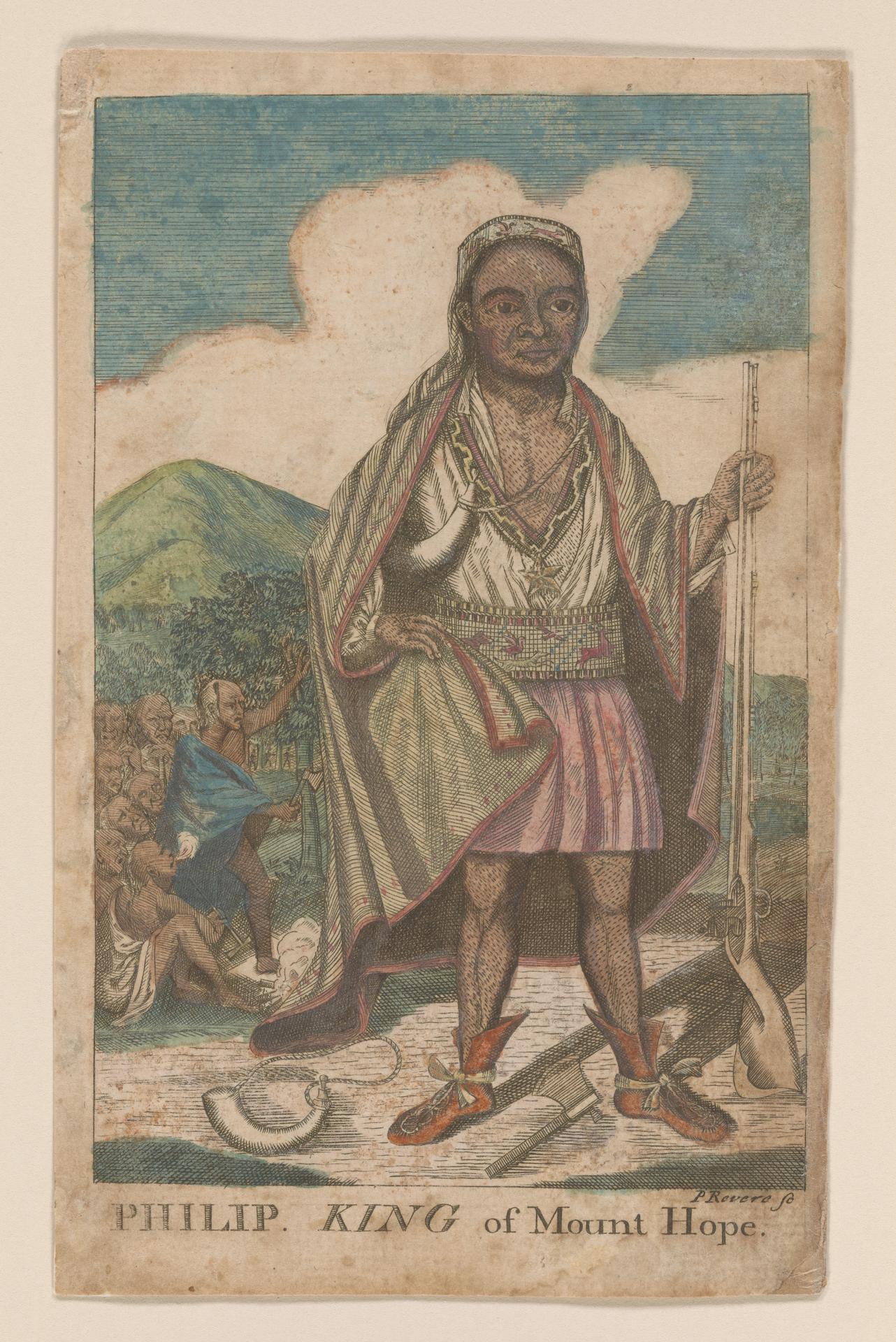 The immediate cause of the war was the execution of six Wampanoags in June for the allegedy murder of John Sassamon, a Native Christian convert (a so-called ‘Praying Indian’) who had previously served as a mediator between colonists and Natives.  In January of 1675 he had warned Plymouth’s governor that the new chief of the Wampanoags, Metacomet (who used the name King Philip among the English), was gathering allies for a war against them in reprisal for stolen lands and the forced confiscation of muskets and other weapons.  Sassamon’s warning was dismissed as improbable and he was sent away.  Soon afterwards his remains were discovered in the frozen waters of a nearby pond, his neck broken.  A jury of 12 colonists and 6 Wampanoags was convened and, despite conflicting testimony, a part of Natives was convicted of his murder.

After the executions, scattered Native groups began raiding English settlements in the Plymouth Colony.  The first to be attacked was Swansea, which was raided on June 20th and several days later burnt.  Other towns were attacked soon after, as an eclipse on June 27th was seen as a supernatural omen in favor of war.  The Plymouth colonists mounted a reprisal attack on the Wampanoag settlement of Mount Hope, which they assumed was the capital of the tribe, and burned it.

Soon Native groups were raiding sometimes burning English towns far beyond Plymouth – the interior towns such as Deerfield, Lancaster, and Brookfield were especially easy targets – and many smaller communities were abandoned for the safety of Boston or larger towns.  No town was considered safe though, and the whole of the English colonial community reacted with panic.  The Massachusetts Bay, Plymouth, New Haven, and Connecticut colonies entered into a military alliance against the Wampanoag and their allies. 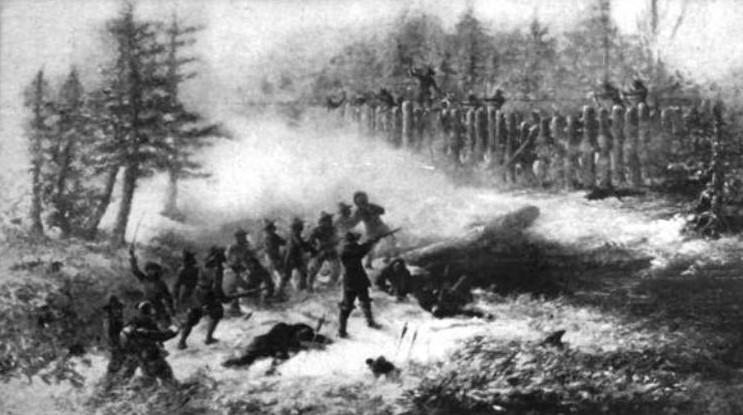 Some on both sides attempted neutrality – such as Rhode Island – but a the war became a regional phenomena, all groups were forced to choose sides, willing or not.  The Narragansett refused to support Metacomet directly but had agreed to allow Wampanoag women and children to take shelter with them.  They were raided by colonial troops in December of that same year; 300 Narragansett were killed, their winter stocks destroyed, and their main settlement burned.  The survivors allied with the Wampanoags.

Throughout the winter and into the Spring, English settlements from Rhode Island to Maine were raided and sometimes burned (Connecticut’s colonies were protected in part by the fact that the Mohegan and surviving Pequots allied with the English against their old enemy the Wampanoag).  Providence and Springfield were the largest settlements destroyed, but many others were besieged, burned, and abandoned.  Even Plymouth itself was attacked in March.

During this time the colonists, unable to locate the diffuse Native fighters and lacking Native settlements to strike, focused instead on destroying the food stores and spring crops of the Wampanoags and their allies.  This program was ultimately quite successful, as it served to peel away the other Native allies from the Wampanoags as they could not long survive without the most basic of necessities.  Metacomet also failed to gain an alliance with the Mohawks in the Hudson River valley and they instead began to raid his Nipmuc allies and other tribes in Massachusetts who had been weakened by the war.  Hungry band of Native began to surrender to colonial troops by the mid summer and the Wampanoag-lead alliance disintegrated.

Metacomet, leading a small band of Wampanoag, was shot and killed by a mixed raiding party of colonist militia and Native allies in the August of 1676.  His dead body was hanged then drawn and quartered, and afterwards his remains were gibbeted (see Day 11) and his head mounted outside of the fort at Plymouth.  By that Fall, the remaining forces in his coalition had either surrendered or made peace with the English.  (To the north in Maine fighting continued until 1678, though this is generally regarded as part of a separate conflict, dubbed the First Abenaki War.)

Effects of the War:

For the Native people the war was a catastrophe, with an estimated 2000 Natives killed in fighting, 3000 dead from starvation or illness, and another 1000 enslaved and deported. This is out of an estimated total population of the involved tribes of not much more than 10,000.  The Wampanoags, Narragansett, Nipmuck, and other small groups cease to exist as organized tribes and their lands in southeastern and central Massachusetts and Rhode Island were rapidly taken over by the English. With a scattered few exceptions (such as Aquinnah on Martha’s Vineyard), all Native lands in southern New England passed into English control. Those tribes which fought for Metacomet had their members deported, mostly to Bermuda, where they were enslaved on the sugar plantations there while those that could, fled north or west hoping for

safety.  Even the Praying Indians, who occupied more than a dozen communities on the periphery of the Massachusetts Bay colony, had been forcibly relocated to a pair of desolate islands in Boston Harbor where they suffered greatly in the winter of 1675 – of the 500 consigned there only 167 survived to the spring.   In the aftermath of the war the Native population is thought to have declined at least 2/3, inclusive of all Native groups.  In the future, many Native peoples in the northeast would turn to French as allies and as a counterweight to the increasing strength of the English and their colonies, further, increasingly serving as French proxies in future wars.

For the colonists, the war was merely devastating.  English casualties are estimated to have been about 600 in direct fighting but the loses from raids and illness and injuries among the troops and the general population were at least twice that.  In the Plymouth colony, 1 in 12 men had died during the war.

Financially and politically the war took a serious toll as well.  Significant debts were accrued by the colonies to the British government.  In turn the war raised the profile of

the New England colonies and the traditional autonomy they had enjoyed since their foundation was badly undermined – by 1688 the six New England colonies were consolidated into a single Dominion of New England under direct royal control.  While that super-state was broken up soon after and a degree of local authority restored, Plymouth was forever absorbed by the Massachusetts Bay colony (and later the Commonwealth of Massachusetts) and greater centralized state control became the norm.

The towns raided and burned during the war were rebuilt, eventually, but the impact on the psyche of New Englanders was significantly impacted.  A more moderate and nuanced regard for the Natives was stripped away leaving only stereotypes and contempt.  Some historians have postulated that the Salem witch trials were at least partially fueled by general anxieties about possible Native attack, especially in outlying towns like Acton and Groton; several of the young women that Cotton Mather described as suffering from bewitchment had been taken captive during Native raids or been subject to violence during them.  In the popular imagination the ‘Indian’ was now a perennial ‘bogey-man’, something to be feared and destroyed.  Co-existance was considered to be an impossibility.

Tomorrow: What Does this all mean for my Lovecraft Country game?