The Disappearance (and Alleged Recovery of) of J. Bruce, of Winchendon

Here is a strange case of a disappearance (and quite possibly the murder) of J. Bruce, supposedly solved by a psychic, in Boston in 1848.  From The Western Literary Messenger (from Buffalo, New York) of April 22, 1848 we find this report (which I have transcribed and made minor corrections to):

From the Boston Traveler of Saturday

Two years ago last February, a lad named J. Bruce, of Winchendon, Mass, was despatched by his father to this city, with a sled and two horses, to sell a load of straw, since which time he has never been heard of. Recently a keg was found in Eastman’s stable, in Deacon street, in this city which was known to have been in the possession of the boy, and this led to a disclosure that at the time of the boy’s disappearance, the horses had been left at Mr. [Eastman’s] stable by the boy and never claimed and that E[astmans]’s Mr. E[Eastman], after keeping them a proper time and advertising them, sold them, and has on hand the balance of money, deducting charges.

The man has been found who bought the sled of the boy. Finally after a long search, the body of the boy himself was found, buried in one of the city tombs in the South burying ground, with his clothes still on.

There is no record of his death or burial upon the books, which leads to the supposition that he was buried under a feigned name, and that there has been foul play in the matter. The body has been taken home to Winchendon.

A long account in the Boston Journal adds a variety of details, among which figure the revelations of a Mesmeric clairvoyant who was consulted by the father. This person described it is said the departure of the lad from his home and added that:

Although he was of unexceptionable character, he had fallen into bad company, was induced to drink something soon after which he was seized with convulsions and died in that state; that he was then buried under a heap of manure, but was subsequently removed and taken out upon the water, and his body sunk in the harbor; that it was afterward found, and was placed in a tomb in the South burial ground.

From reasons which were satisfactory to Mr. Bruce no examination of the tomb was had at that time, and the matter rested without any farther developments being made, until some few weeks since, when two relatives of the family were in the city, and more from curiosity than any reason, visited the clairvoyant referred to, and the same circumstances were detailed to them had been previously related to Mr. Bruce, with the addition that the coffin containing the was in a particular position in the tomb No. 15, in the South burial ground.

Mr. Lincoln, superintendent of burials, Mr. Bruce and two or three of his friends, repaired the South burial ground. They opened the No. 15, moved several coffins, and upon the lid of that described by the clairvoyant, Mr. Bruce exclaimed, “that’s my son—I remember those pantaloons.”

(For those unfamiliar with Massachusetts geography, Winchendon is a town in northeast Worcester County, about 70 miles, give or take, from Boston.  In this era this would have been a trip of a week or more, round trip, by horse with a sled.  It was primarily a farming community in that era, and the population of Winchendon in 1848 was about 2400 people

I first spotted this story on this site, and attempted to track down the original stories cited, but the above article is the only contemporary version of events that I can track down online.  The above link provides what I believe are quotes from the Boston Post from May of 1848 expressing a great deal of skepticism about the efficacy of the psychic employed by the elder Bruce:

The great mesmeric case, in relation to the death of young Bruce, is unquestionably a humbug from the beginning. The woman told the father a long story about his son, but little of which has been verified beyond what a small degree of sagacity might have foretold without a mystery. The report that the woman told the number of the tomb is not correct—she said the body was in a brick tomb. The reason that tomb No. 15 was opened was because the father went to the superintendent of burials and asked him to look at this record and see if any person found drowned was put into one of the city tombs in February, 1846. The superintendent, Mr. Lincoln, accordingly turned to his record, and found that the body of an unknown person, found drowned, was placed in No. 15 in that month.

In consequence of this, No. 15 was opened, the coffins examined, and a skeleton found in one of them which Mr. Bruce thought was that of his son from his dress, which bore some appearance of the kind of clothes he wore when lost; but it is extremely doubtful whether the bones found in the coffin were those were those of young Bruce or not—indeed the clothes in the coffin of a colored man, the body was found drowned, bore a much closer resemblance to those described as young Bruce’s than garments in the coffin of the skeleton claimed by Mr. Bruce to be his son’s. The excuse the mesmerizer gives for not disclosing the names of the abusers of young Bruce is, that the principal among them will take her life if she does. The whole mesmeric portion of this affair is clearly a gross imposition.

So far I have been unable to specifically identify either the elder Bruce or his son J. Bruce- there are no good matches in the Winchendon cemeteries and the pair of J. Bruces I can find in Worcester County who died in 1846 are in the southmost part of the county and very distant from Winchendon.  I also cannot identify the “mesmerizer” mentioned in the story, but as we have seen previously (see our October-ganza posts about William Mumler and the Boston Society for Psychical Research), Boston certainly had an active spiritualist community throughout the 19th century, so a psychic/mesmerist being employed to locate a missing person is certainly quite plausible. 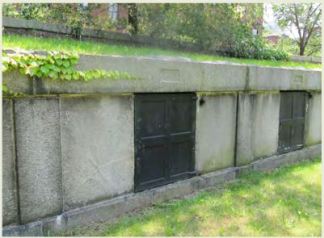 The South Burying ground mentioned is presumably the South End Burying Ground, which operated from 1810 to 1866, was primarily a burying place for the indigent and the working class of Boston, the later could purchase a plot for a nominal fee, though few graves were marked as tombstones had to be supplied by the family of the deceased.  For more information about this lesser-known burying ground in Boston, see this report from the Historic Burial Grounds Inventory Project: South Burying Ground (1984) as well as this excellent issue of the Historic Burying Grounds Initiative Newsletter (from whence I obtained that nice photo of a tomb above).

(Hypothetically it could also refer to the little-mentioned “South Boston Tomb Site” which was set established at Dorchester and 7th Streets in South Boston in 1810 – Lambert’s A Guide to Massachusetts Cemeteries (2nd Ed, 2009) suggests the site was discontinued shortly there after, but as the St. Augustine Cemetery (est. 1819) is in almost the same location I wonder if they are one and the same.  I note that the best source about this burying place notes that there were 15 tombs built there…)