Derleth Country #7 – The Shadow in the Attic

This story first appeared in the collection Over the Edge, published by Arkham House in 1964.  No one has offered any plausible suggestion as to which of Lovecraft’s Commonplace Book entries served as Derleth’s inspiration for this particular tale, so this seems to have been a product solely from Derleth’s imagination alone.

I have the strangest sense of deja vu when I say this, but, a  young man inherits his uncle’s ancient house in Arkham… (cf. “The Gable Window”, “The Shuttered Room” + at least one more story to come and at least one other Derleth story set outside Lovecraft County). 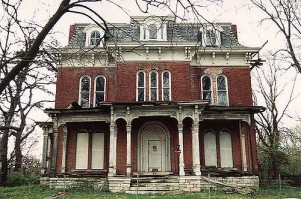 Uriah Garrison was a bad bad man – those who crossed him tended to die in inexplicable ways.  Our narrator, Adam Duncan, is the old man’s great-nephew who, upon his death, has inherited Garrison’s brooding house on the outskirts of Arkham, on Aylesbury Street next to the Old Wooded Graveyard.  Uriah Garrison had a most unsavory reputation, unfriendly to his neighbors, fond of taking walks in the nearby cemetery, and a passionate student of the Salem Witch Trials… wait, am I Uriah Garrison?!?  Anyway, our narrator, never having watched a horror film or read a short story published by Arkham House, decides that he should take up residence in this obviously cursed house of doom.

Luckily the old Garrison house comes with all the modern amenities – a wood stove, no electricity, “archaic” plumbing, an enormous collection of of books about witchcraft and the occult, and apparently a live-in maid who wears rubber gloves and a mask.  A young

I know this isn’t quite what appears in the story, but I’ll leave it to you to do a search for “rubber mask maid”.

Duncan had encountered her and her “strange emotionless, expressionless face” one evening as a boy when staying with his terrible great-uncle.  Despite the assurances of Mr. Saltonstall, Garrison’s lawyer that no provision was made to keep on his late great-uncle’s old housekeeper, the house is found to be in immaculate condition, for a ramshackle mansion of nightmares.  What, you don’t have a maid who sounds like a minor character from any season of American Horror Story?

So, Duncan takes up residence in this obvious trap and gets back to work at his dissertation on Thomas Hardy – what, Frank isn’t sophisticated enough for you – by lamp light, of course.  At this point the actual hero of the tale appears.  Her name is Rhoda Prentiss and she immediately recognizes that the house is a very very bad place.  The house, according to Adam, doesn’t seem to like Rhoda much either.  Personally if I had the impression that a house didn’t like someone, I might get away from the house, but our narrator seems oblivious to this supernatural house-on-financé disdain.  Nevertheless she agrees, after a dinner in Arkham, to spend the night.

Here is where the story gets a little blue, which considering Derleth was trying to pass this off as a collaboration with Lovecraft, is a weird damn turn.  Late that night Adam awakens to discover he is not alone in bed…

I thrust forth a hand and encountered, unmistakably, a woman’s naked breast!  At the same moment I was aware of her hot, fervid breath

While at first he thinks this might be Rhoda, a quick comparison of breasts (yes, that is not a typo) he realizes this is not her at all (though a caddish twit, Adam make sure to let us know that she’s definitely been in his bed before and he’s definitely a sex-having cool guy).  Despite hearing some horrible shrieks of a woman in pain, he heads back to bed.  In the morning Rhoda informs Adam that she encountered a disturbing expressionless woman in the house last night.  She immediately shuts down Adam’s ludicrous theories that it was Garrison’s maid, somehow still at work without pay, and warns him directly that she has a feeling that the house has some sort of malign design upon him.  He waves her off, of course, and sends her packing back to sensible town. 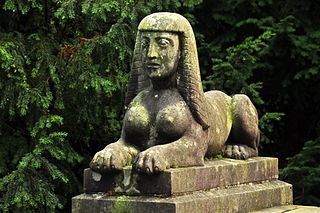 It was either this or a picture of Hank Venture in his Countess power armor.

(I want to note that a search of Lovecraft’s fiction only a single mention a breast that might actually be in reference to the mammaries… and even in that case it was of a stone sphinx.)

With his pesky (and lets admit it, far more sensible) fiancé gone, Adam decides now is the time to explore the attic room that he was forbidden as a child from ever visiting.  It is totally normal and unremarkable… save for the woman’s clothing, rubber gloves, and a bewigged mask.  Totally normal stuff.  Great-Uncle Uriah has also decorated the room with an inexplicable shadowy outline of a human form on one wall (across from an odd “mouse-hole” as well as a series of curious lines drawn upon the walls.  Again, totally normal.  After this discovery he has a brief moment of terror, feeling as if the very room was holding its breath.

So, after temporarily having a human response, Adam decides to instead plumb the mystery of the phantom maid and upon the advice of Mr. Saltonstall, who suggests asking 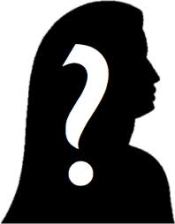 around the neighbors as Uriah was a very private fellow, he canvases the neighbors.  They all suggest that not only was the strange woman never seen to come and go from the house, but some of the neighbors are not sure that Uriah Garrison ever died, owing to his fascination with witchcraft and the occult.  It at this point that Adam reviews his inherited library – shocking not the same list of books from earlier stories, but a collection more more traditional works like the Malleus Maleficarum and Fuga Satanae.

Soon after Rhoda telephones Adam to warn him that, based on some research she’s done about the house and Uriah Garrison, she fears that he is in grave supernatural danger and that his late great-uncle’s motivations for offering him the house in his will had some dark purpose.  Adam, who by all accounts is an idiot, dismisses her concerns as her womanly irrationality.

Cue weird visions of Uriah and the bemasked “maid”, weird blue lights, and nightmares.  Repeat a couple times until Rhoda arrives and begs for Adam to leave the house which, or reasons he cannot it explain, he refuses.  Another round of weird dreams later (and yes, I’m growing sick of finding new ways to say that Adam does something foolish), and just before the vaporous form of Uriah Garrison can fully overwhelm our dim-witted narrator, he’s suddenly snapped into wakefulness by the smell of smoke and Rhoda’s crying his name.

Faster than you can say ‘speaking in tongues‘, he discovers that Miss Prentiss has set the house on fire and had put a ladder to his bedroom window so that he could escape.  The house burns down, destroying everything within.  Rhoda and Adam are wed, and the story ends with an unsubtle hint that maybe Uriah Garrison’s consciousness has survived somewhere in Adam’s mind.    Yeah, maybe.

If you don’t feel like reading, there is always Allen Kent’s fine reading of the tale:

We don’t get much, frankly.  We are told that Arkham is expanding out along the Aylesbury Pike, but our narrator goes nowhere save the old Garrison House, so we get nothing really of Arkham.  The house, Uriah Garrison, Adam Duncan, and Rhoda Prentiss do not appear anywhere in Lovecraft Country materials.

Uncle Uriah’s lawyer Mr. Saltonstall does appear, old-fashioned starched collars and all, in Arkham Unveiled as E.E. Saltonstall Esq. (entry 124).  Oddly, his entry says he only takes the most respectable clients, which doesn’t sound much like great-uncle Garrison…

Personally, I created a small write-up of Miss Rhoda Prentiss for use as a Call of Cthulhu PC/NPC (6th Ed. rules) during our first October-ganza.  She was far too sensible and entertaining to be forgotten.

This isn’t a great read.  Frankly, it is little more than a mash-up of “The Dreams in the Witch House” and “The Thing on the Doorstep” with an evil room, weird lights and a mysterious old woman, and attempted possession.  If it weren’t for Rhoda Prentiss, I’m not sure there is frankly anything worthwhile in the story.  Adam Duncan is a dullard, even for Derleth’s protagonists, and Uriah Garrison is without depth or any clear motivation.  It is not my least favorite Derleth story, but that says more of the terrible quality of “The Dark Brotherhood” rather than anything actually redeeming here.  Kids, if the house says “Get Out”, you leave.  This is not a point worthy of discussion or debate.

Further, the breast I had touched was not Rhoda’s; her breasts were firm, beautifully rounded – and the breasts of the woman who had lay next to me on my bed was flaccid, large nippled, and old.

Coming next… “The Horror from the Middle Span”!