As part of the ever-in-development guidebook Graveyards of Lovecraft Country, we explore the variety of burial sites and types occurring in New England.  Sometimes these differences are issues of era – old graveyards are different looking physically from more modern ‘Garden Cemeteries’ (note how even the names changed) – but others have more esoteric roots.  Today we look at the role religion played in two unusual varieties of burying grounds – the burial practices of the Quaker religion and the cemeteries of New England’s Shaker communities.

New England’s earliest settler’s were mix of fortune-seekers and Puritans – decentralized Protestant denominations, often Calvinist in theology, that rejected the authority of the Anglican church – looking for a place they could practice their religion in peace.  Despite having fled Great Britain to escape religious persecution… or perhaps even because of it… the Puritans were willing to use the power of the colonial governments to suppress religious practices different than their own.  The region was seen by many as not just a physical political entity, but one with an express spiritual one as well – a Puritan realm free from the sin of religious error and idolatry.

It is not surprising, therefor, that Native American religious practices were seen as tantamount to Satanism.  Likewise Catholicism was seen as only a marginal improvement.  As with many doctrinal clashes though, the harshest and most impassioned attacks were reserved for those whose faith different by degrees rather than by foundational ideas.  These near-Puritan denominations were seen by New England’s ministers as far more likely to draw converts away from the Elect (and into sin) than the heathen rites of the Indians or the Popish excesses of the Catholics. 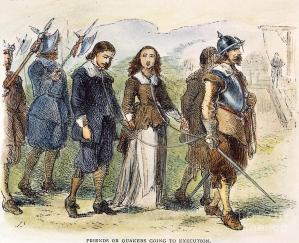 The Quakers were regarded as especially pernicious and were subjected to particular degree of scorn, particularly in the Massachusetts Bay colony.  Quaker missionaries first arrived in Boston in 1656, where they were arrested and their religious tracts burned.  While fines and exile were the most common punishment inflicted against them, several Quakers who returned to the colony after previously being exiled were arrested and publicly executed as a warning to others.

Because Quakers refused to recognize the authority of the Puritan church – having rejected hierarchy and authority in all things and embracing a radical form of spiritual equality – Quakers were generally prohibited from being buried in church-operated graveyards in New England.  While the British monarchy decriminalized most non-Puritan faiths with the Toleration Act of 1689, including the Quakers, they remained excluded from most burial sites in the region.  This separation was not just imposed from without, however, but was driven in part by certain doctrinal difference as well.  Quaker Churches, no longer outlawed, created their own burial grounds which differed in notable ways from those of their Puritan neighbors.

The most visible feature, so to speak, of a Quaker cemetery, is their general lack of gravestones or monuments of any kind.  Gravestones were seen as sign of material wealth or a way to distinguish between the faithful and were prohibited.  At most, the family of the deceased might lay an unmarked fieldstone as an aid to remembering where their loved one was buried.  Within a generation or two, however, the identity of the specific deceased would be lost.  By the mid-19th century however, Quaker teachings evolved, likely influenced by the wider cultural shifts in opinion regarding burial practices, and simple gravestones were permitted.

Visiting one of New England’s Quaker cemeteries today, it is often hard to distinguish them from any other grassy place, save for the fact that most are enclosed by a wall and, sometimes, when a local historical society or concerned municipality places a sign identifying the place.  While in a few cases markers were added to old burying grounds when Quaker teachings evolved, many were left as they were originally intended, a humble testament of equality of all in faith.

Strangely, the best known Quaker burying ground is the so-called “Spider Gates” cemetery in Leicester, Massachusetts, where perversely the simplicity of the burying ground has, combined with its relative remoteness, given rise to a whole panoply of absurd supernatural claims.

For the more historically minded, the case of Boston’s Quaker cemetery is of interest.  While there had be some attempt to mark the site of the burial place of Boston’s Quaker Martyrs, the Quaker community there, once the sect’s members were no longer banned from the city, the first official Quaker burying ground wasn’t established until 1709 on a plot off of Congress Street just north of what is now Post Office Squre.  Boston’s Quaker community, never large, found more hospitable places to live and, by the early 19th century, had considerably shrunk down.  Eventually the Boston ‘Meeting’ (i.e. church) was disbanded and.  In 1825 the neglected cemetery was removed.  Most of the remains were moved to the Quaker cemeteries in Lynn or Salem; the remainder were taken to a number of smaller cemeteries or family plots.

Coming more than a century after the era of Quaker persecution, the Shakers were another Christian denomination whose burial practices were outside the norms of the their era.  A millenarian cult, the Shakers (or as they called themselves ‘The United Society in Believers in Christ’s Second Appearing’) were an offshoot of the Quakers, and they practiced an ascetic faith, believing in the equality of the sexes, communal living, pacifism, and celibacy.  They also believed that the Holy Spirit might manifest in the devout during religious services, inducing uncontrollable movements, shouting, and dancing… hence the name ‘shakers’.

Many Shaker burying grounds, owing to the faiths Quaker roots, had no grave markers at all or, though a few still included small fieldstones places by other members of the sect to help them remember where a particular ‘brother’ or ‘sister’ might be buried.  In later years Shaker communities permitted the deceased a small, simple marker, usually the name and perhaps the years lived.  Some older burying ground went back and added markers  for those who had passed before this change but many simple added a single monument.

A close-up on one of the ‘lollipop’ markers

The Shakers at Harvard (the town, not the university) in Massachusetts created one of the most unique looking burial grounds in all of New England.  Instead of stone markers, they erected hundreds of cast-iron markers atop slender rods.  Today the placed is commonly known as the ‘Lollipop cemetery’ based on the shape of the iron markers there.  It is a rather whimsical name for a generally somber place.  Still, if you’re in the area, it is worth a visit.  Atlas Obscura has a nice entry about regarding this odd spot.