I found what I had half expected, that where the shunned house now stood the Roulets had laid out their graveyard behind a one-story and attic cottage, and that no record of any transfer of graves existed.

Forgotten cemeteries are a trope of horror fiction – even Lovecraft had the cause of the horrors of “The Shunned House” stem from a secret burial in the basement.  Here are a few cases of lost cemeteries in New England a little bit of information on how they were rediscovered, assuming they were, of course… 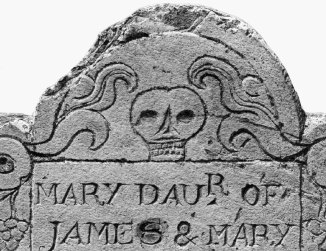 There are a common qualities shared by most cemeteries that are lost – they are either the earliest burial site of a community (or the earliest for a smaller sub-community, such as a ‘dissenting’ religious community), were part of a socially marginalized group (pauper’s burials, minority communities), were part of a mass burial site – usually due to disease, or are in a remote location, distant from human habitation.  These burials sites tend to be poorly marked, even when active, or suffer from neglect (or even vandalism) to the point where such markers as had survived are difficult, if not entirely impossible, to find.

As New England’s largest city, Boston also has the greatest number of burials.  It is perhaps not surprising that some of them, whole burying grounds in fact, have been lost to history.

Leicester (also home of the “Spider Gates” cemetery we have previously discussed) is a small city in central Massachusetts, west of Worcester.  First settled in 1713, today the town has a population of about 10,000.  According to Lambert’s A Guide to Massachusetts Cemeteries (2009), there are 15 burial places in Leicester, from the single grave of Ruth Payne to the grounds of the Cherry Valley Cemetery.

migrated away from the area.  In 1831 a nearby stream was damned to create a mill-pond, isolating the plot on two sides with water and, over time, it became overgrown.  Cemetery records from the mid 19th century recorded that the site had no marked gravestones, though modern surveys note that at least one field stone is inscribed with the initials I.S. or J.S.  The site was all-but-forgotten by the mid-2oth century when it was rediscovered – the details are frustratingly vague on this point, but considering the town’s expansion in the post-war era, I suspect it was due to suburban sprawl.  Today the site is still undeveloped and unmaintained, in part no doubt due to being surrounded by private property.  The site, due to its age and the fact that at least two Revolutionary War veterans are buried there, is listed among several potential sites for future historical development.

See this site for more information.

There are 12 cemeteries, give or take*, in Dudley, a rural town in Worcester County along the Connecticut border – some in better repair than others.  Much of the town is occupied by state forest, giving the town an isolated feeling, and many of the little burying grounds, mostly expanded family plots, are in generally poor repair, or at least overgrown.

At least one of Dudley’s burying grounds, the Quinebaug Cemetery (the name comes from the nearby Quinebaug River, the name meaning “long pond”) has been lost not just once, but twice.  The small burial site was lost at some point after the early 19th century, only to be rediscovered around 1900.  After it was relocated, many, but not all, of the burials were relocated to Village Cemetery, the town’s main burial ground in 1913.  Almost a century later the cemetery, was again rediscovered, though today there are no intact gravestones and there is little to distinguish the spot from any lightly forested spot in Massachusetts.

This findagrave entry for the cemetery is the best source online about it.

*Looking at Lambert’s Guide to Massachusetts Cemeteries (2nd edition, 2012), I note a couple cemeteries listed that are likely to simply alternate names of the main “Village” cemetery and that the mostly overgrown Blackmer Cemetery was not included.

A fascinating story of a rediscovered burying place is that of the African American Cemetery of Portsmouth, New Hampshire.   The burying ground was originally on the outskirts of Portsmouth and used by the town’s small community of Free Blacks and Slaves that called the city home – slavery, while less common in New England, was legal throughout the American colonies until after the American revolution.  A New Hampshire census, for example, from 1708 indicated that there were 70 slaves in the colony.

From the pamphlet ‘In Honor of Those Forgotten: The Portsmouth New Hampshire African Burying Ground’

The burying ground was simply Chestnut Street until October of 2003 when workers discovered a coffin at a depth of 8 feet.  (The ground was exceedingly wet, which caused most of the human remains to break down but, due to the lack of oxygen, preserved the wooden coffins.)  It was quickly determined that this was in fact the “Negro Burying Ground” marked on early maps of Portsmouth.  Historical records show that the burying ground was in use as early as 1705 and operated throughout the 18th century.  As late as 1859 the site was still identified as “the Negro Burying Ground” but as some point afterwards it was, either intentionally or through neglect, forgotten and became built-over.

Once the site was rediscovered, the city government, academics, and interested citizens worked together to preserve the site and memorialize the more than 200 individuals who had been buried there.  As the second oldest African American burying ground in the northern United States, the historical importance of the site is unquestionable, but it was difficult to accommodate the need to allow the businesses along Chestnut Street to remain open but to memorialize those who were buried there.  Eventually a plan for a public memorial plan was approved, turning Chestnut Street into a pedestrian walkway adorned with statues and other memorial items.

We have saved the most supernaturally-inclined tale of a lost and found cemetery for last, because what was discovered wasn’t just the typical collection of bones and funerary remains but those of a vampire!

Well, in this case it was a New England vampire, which despite Stephen King stories to the contrary, has only a passing resemblance to Hollywood-style Eastern European blood-suckers.  These were more parasitic embodiment of the ravages of tuberculosis, preying on their immediate family members slowly, killing one after another in a slow, terrible procession of wasting death.  In many parts of New England, the folk-belief in these spirits offered a technique to stop the dead from afflicting the living – the exhumation of the corpse and the burning (and some times consumption of the ashes of) the “vampire’s” heart.

It is due to this practice we are able to determine that one of the dead of the once-lost Walton Family Cemetery of Griswold, Connecticut (sometimes referred to as Jewett, the name of the nearest village to the site).  The site had been forgotten for many years until the expansion of a gravel pit exposed a pair of human skulls which were uncovered by some boys playing with the exposed wall of dirt and gravel.  After determining that the skulls weren’t from some recent murder victims, the site was turned over to state archaeologists who went about excavating the site – which was in endangered by adjacent gravel works – who uncovered the remains of 29 individuals (15 children, 6 males, 8 females) buried there; the cemetery was active probably from around 1800-1850.

One burial in particular, a fifty-five year-old male, piqued the interest of the archaeologists.  His skull and leg-bones had been placed across the top of the rib-cage; the remains showed signs that he had suffered from a fatal case of tuberculosis or a similarly fatal lung ailment.  This joined together the not just this folkloric tradition of postmortem mutilation of the “vampire” corpse but the disease believed by modern scholars to have been the cause of the deaths the supposed vampirism had caused.  Tacks in the deceased’s coffin identified him as “JB – 55”.

Researchers, assisted by Michael W. Bell, author of Food of the Dead, the definitive survey of New England’s vampire phenomena, discovered a newspaper account from June of 1854 in the Norwich Courier:

A strange and almost incredible tale of superstition has been related to us of a scene recently enacted in Jewett City.  It seems about eight years ago, a citizen of Griswold, named HORACE RAY, died of consumption.  Since that time, two of his children – both of them sons and grown to men’s estate – have sickened and died of the same disease, the last one dying some two years since.  Not long ago, the same fatal disease seized upon another son, whereupon it was determined to exhume the bodies of the two brothers already dead and burn them.  And for what reason do our readers imagine?  Because the dead were supposed to feed upon the living, and that so long as the dead body in the grave remained in a state of decomposition, either wholly or in part, the surviving members of the family must continue to furnish the sustenance on which the dead body fed.  Acting under the influence of this strange, and to us hitherto unheard of, superstition, the family and friends of the deceased, proceeded to the burial ground at Jewett City, on the 8th inst., dug up the bodies of the deceased brothers, and burned them on the spot…

While the specifics of this case do not align with the body discovered here, the location and date do correspond, strongly suggesting the deceased JB was likewise thought to be a vampire and his remains were “neutralized” in the same way.

The findings of the excavation here are presented in the article Bioarcheological and biocultural evidence for the New England vampire folk belief (The American Journal of Physical Anthropology, 1994). 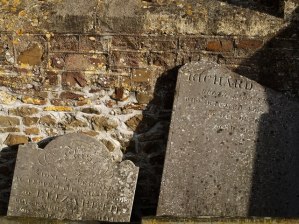 There are many more examples of lost burial places; here are a few examples I turned up with just a little bit of… digging.  I am sure there are many more stories of forgotten, lost (and perhaps rediscovered) burying grounds across New England; I am confident there remain many more graveyards still forgotten and waiting to be found.