The archetypal New England gravestone is often rather impersonal – a winged skull, a few names and dates, a Biblical verse or standard memento mori.  Having viewed thousands of gravestones I recognize that there are far more variations in gravestones than the casual viewer might assume and today’s specimen is a good example

Martha Green and her infant child died in June of 1770 and were buried in the Harvard, Massachusetts Burial Ground – in this case it is the small town of Harvard, just west of 495 and south of Rte 2 not the University.  Their marker, made at the Park family shop in nearby Groton (likely it was the elder John Park considering the date), has, instead of the usual Park bust depiction of the deceased, a 3/4 view of Martha holding the infant.  The portrait is framed by a stone archway that is in turn flanked by two willow trees, which while ubiquitous on stones after 1800 were very rare beforehand.

Beyond the portrait of the deceased mother and child, the epitaph is very much unlike 17th and early 18th century ones.  There are no admonitions to faith in God or warning of suffering in Hell.  Instead, it is mournful, a commemoration of the young Mrs. Green and her child and collective acknowledgement of the pain of the bereaved.

In memory of Mrs Martha

of Doctor Peter Green, who

who departed this Life June 8th

To the deep Regret of thofe who

were to happy to be nearly

allyed to her, and the Great Grief

How charming all, how much she was adored alive;
now dead how much is her loss deplored.

This stone is also a nice reminder that even skilled carvers, like Park, sometimes ran out of space on a line and had to squeeze things into what space they had.. 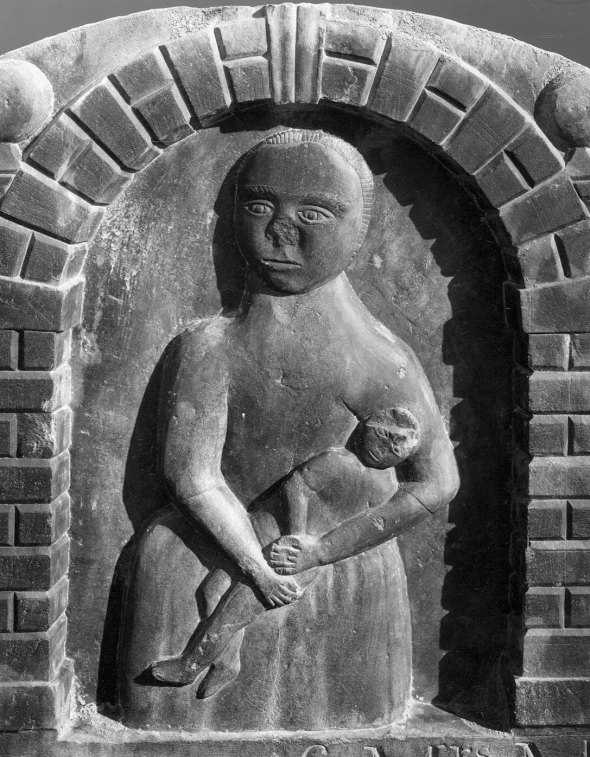 While some there is some chipping the hard slate has survived pretty well for being over 200 years old.