aToday’s story I read a few years after yesterday’s “Tippity Witchit”; I suspect most of you, possibly all of our readers, have read it, since it is one of the classics of literature. 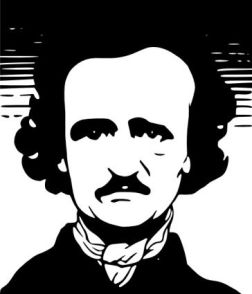 I distinctly recall the day in 5th grade when we read “The Tell-Tale Heart”, Edgar Allan Poe’s tale of obsession, madness, and murder.  The teacher’s goal wasn’t so much to frighten us as to teach us vocabulary – I think one of the words featured from the story was “acute”.  Nevertheless, I’m pretty sure this was the first time we were reading a story in which someone died (directly and not an implied death, like the vicious aunts from James and the Giant Peach).  Likewise it was also the first thing I recall written from the perspective of the murderer.  I was riveted.

I’m not quite sure I should offer a summary of this story – it’s one of the most widely read bits of short fiction and has been frequently revised and redone (and parodied) that I fear any summation I provide would be simply redundant. Here’s Vincent Price performing the story if you’ve somehow missed it:

As a reader. I think I gained my first exposure to an unreliable narrator. Realizing the Old Man had done nothing to deserve the hatred of the narrator was essential to the horror of the tale. I was also unnerved by the idea of a “milky eye”; I imagined it to be much larger than a healthy eye for some reason, possibly oozing.

Finally I think this might have been the first time I connected the inverse relationship between someone telling you how sane they are ;see also: smart, trustworthy, caring, unbiased,wealthy, etc) and how insane they actually are. We might call this the Norman Bates rule, as despite his protestations he would most certainly hurt a fly.