Then, too, the natives are mortally afraid of the numerous whippoorwills which grow vocal on warm nights. It is vowed that the birds are psychopomps lying in wait for the souls of the dying, and that they time their eerie cries in unison with the sufferer’s struggling breath. If they can catch the fleeing soul when it leaves the body, they instantly flutter away chittering in daemoniac laughter; but if they fail, they subside gradually into a disappointed silence.  These tales, of course, are obsolete and ridiculous; because they come down from very old times. – “The Dunwich Horror” 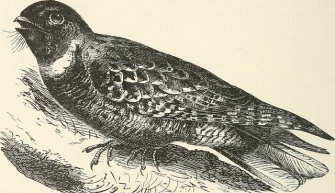 Lovecraft made careful use of historical events and folklore, including the above anecdote, weaving reality and fiction together in a most unnerving way.  For today’s post, I thought I might look at a bit of the history of this legend…

Lovecraft first heard of the association between whippoorwills as a death omen during a visit with Edith Miniter in Wilbraham Massachusetts, in 1928.

The legend seems to have its origins in Native American lore – the Algonquin considered its cry an Omen of death and the Mohegan people connected them with the Makiwisag, a native variant of Little People.  It was absorbed into New England folklore at some points and variations of it appear in several sources:

The Southern Literary Messenger, a journal from 1845, notes: “The Whippoorwill is said to perch itself on or near rooftree of the dying and give out at intervals its mournful cry until the breath leaves the body when it hushes notes and again betakes itself to the swamps Such least is a popular superstition in Lower Virginia.”

What They Say in New England (1896) – “If a whippoorwill sings near the house, it is a sign of death. Some say this is simply a sign of trouble”

{Other authors have made use of the whippoorwill.  Derleth wrote his story “Whippoorwills in the Hills” in 1948, though the whipoorwills are more color than central to the plot.}