I suppose — you know the old myth about how the weird people leave their spawn in cradles in exchange for the human babes they steal. Pickman was showing what happens to those stolen babes — how they grow up — and then I began to see a hideous relationship in the faces of the human and non-human figures. He was, in all his gradations of morbidity between the frankly non-human and the degradedly human, establishing a sardonic linkage and evolution. The dog-things were developed from mortals!

Lovecraft most likely read The Witch-Cult in Western Europe some time in late 1923, soon after its publication – Robert Waugh suggests the first story that demonstrates Murray’s thesis upon Lovecraft is “The Festival” and suggests her influence on stories including (in addition to the aforementioned one) “The Horror at Red Hook”, “The Call of Cthulhu”, and “The Dreams in the Witch-House”. One story he does not mention, curiously in “Pickman’s Model”. Considering the above quotation (among several), it seems likely that, in fact, some elements of Lovecraft’s ghouls were inspired by Murray’s references to “a dwarf race which once inhabited Northern and Western Europe” and her connecting these ancient people to fairy beliefs. Lovecraft connected Murray’s ‘dwarves’ to some imagined “very genuine dwarf or pygmy race of men” in his essay ‘Some Background on Fairyland’ (from Lovecraft’s Marginalia, which is sadly not on my bookshelf nor in the public domain). Lovecraft suggested legends of dwarves were based the ancient ‘Ayran’ conquest of Europe, displacing a previous ‘Mongoloid’ race already dwelling there; the dwarves were “displaced and drove into underground hiding, and… afterwards kept up a furtive and vindictive course of reprisals against their conquerors”, blending Murray, Arthur Machen’s ‘Little People’, and his own racist notions.

For our next issue of the Arkham Gazette, Christopher Smith Adair has prepared a most fascinating article suggesting how to incorporate Murray’s theories linking Fairies and some atavist dwarfish people into Lovecraft’s ghouls and their connection to witchcraft; while you are waiting for that to arrive, I’ve compiled Murray’s references to said ‘fairies’ into a single document. The text is taken from Murray’s original – portions are in Middle English and I suggest reading them aloud in order to suss out their meaning (we even see a few yoghs -ȝ- sprinkled in!). I have not translated the bits in French, Latin, or German, because I’d rather not trust online translators or my own 10% (or less) skills in those languages. 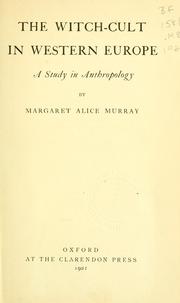 Here is a link to the entirety of Dr. Margaret A. Murray’s The Witch-Cult in Western Europe.

One thought on “October-ganza 22: Ghouls, Fairies, Murray and Lovecraft”