We turn today from murder and gruesome executions in greater Boston to the genteel chambers of an unusual social club headquartered on Beacon Hill. 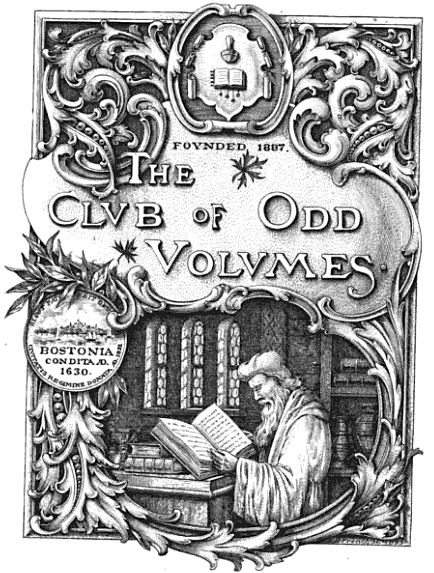 The Club of Odd Volumes was founded in 1887 by a group of like-minded Boston bibliophiles as a gentlemen’s club, likely modeled after London’s Ye Sette of Odd Volumes, which was founded several years previously.  The Club’s official goal was

[T]o promote an interest in, and a love for whatever will tend to make literature attractive as given in the form of printed and illustrated volumes, to mutually assist in making researches and collections of first and rare editions, and to promote elegance in the production of Odd Volumes.

Membership was initially limited to 30 members.  In its earliest years the Club had no fixed meeting place and served mainly a social function.  In 1910 the organization purchased a house at 50 Mt. Vernon Street to better facilitate its membership meetings and to allow members easier access to the Club’s growing library.

Over the years the Club published a… well, a number of volumes on topics (often based on presentations previously given at the Club) related to book printing, publishers, typology, and the book trade, especially in Boston and New England.

The Club is still active today its membership with membership expanded to 87.  The Club relocated a few doors down at 77 Mt. Vernon Street in 1936 where it and its 2200 volume library is available for members and guests.

Using the Club in a game

The plot hooks here are obvious and strong.  In a Lovecraft Country game, the Club might be the nucleus for an investigator group, especially if you want to import Cthulhu by Gaslight scenarios into a New England setting.  There are quite lot of scenario that could be redone to start out as a presentation at the Club.

With the centrality of tomes in CoC (and ToC), the Club might serve as a source of information on a particular Mythos work or writer or other bibliographical topic – need to know what 17th century French printer used a certain watermark? call upon the Club’s membership.  You could rework parts of Bookhounds of London very easily here and use it as the basis for a “Bookhounds of Boston” game.

The Club or some of its members might also serve as antagonists – even if the member’s only interest in a Mythos tome is due to its rarity or scandalous history, there is no guarantee that they will be able to protect it from a cult or that someone in their employ is not in league with malign powers.  The Club could even serve as a tool manipulated by a deeper cult, a la the Hermetic Order of the Silver Twilight.

Building a scenario involving the Club is as simple as reading a little M.R. James 😉