October-ganza Day 11: The Executions of Phillis and Mark, 1755

I have, adding ever on to my browser’s very odd search history, been looking at the use of gibbets in New England.  For those unfamiliar with the practice, this was the display* 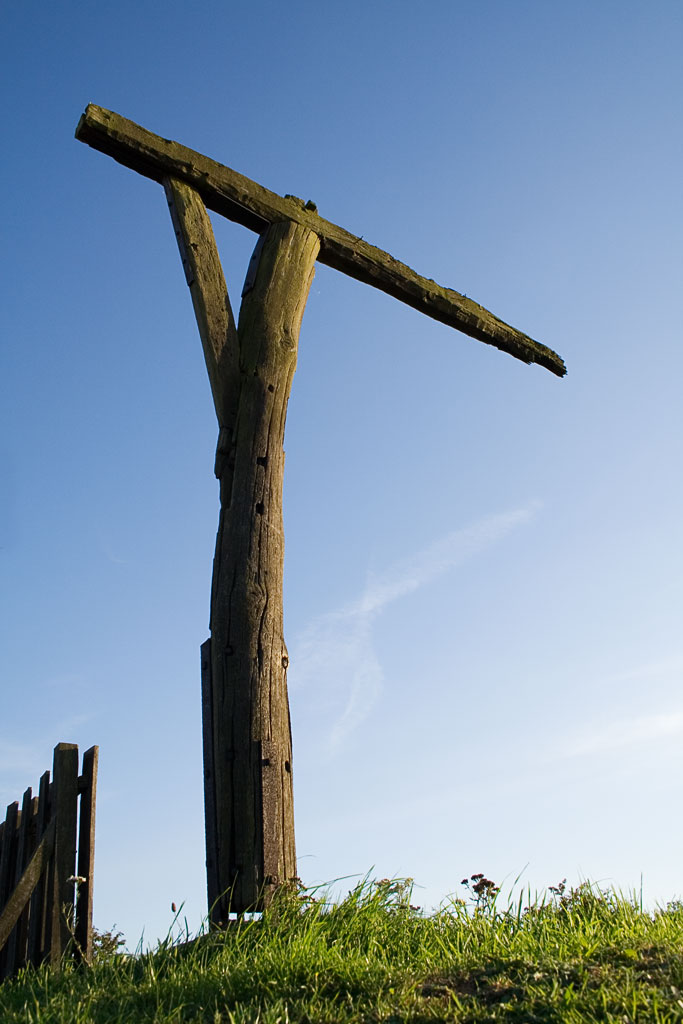 of a dead body after execution, typically by hanging.  A pole, sometimes with a cross-bar at the top, was used and the body might be either bound in chains, specially prepared iron bands, or even placed in a metal enclosure called a ‘crow cage’.  Typically the remains were left on display for at least a period of several years, until the body decayed enough to break into pieces. (*I have found at least one case where the surviving account is unclear if the person was placed into a crow cage before dying, so it is possible that at least one person in New England was left to die by exposure instead.  More investigation is necessary.)

In New England, as in Great Britain, gibbeting was reserved for crimes considered especially grievous by the state – particular varieties of murder, treason, and most often for piracy.  Bird Island and Nixes’ Mate in Boston harbor were both used as gibbet sites.  In Britain’s American colonies gibbeted murderers was almost exclusively non-whites, either Native Americans or African-American slaves*.  King Philip’s body, for example, was quartered and hanged in trees while his head was mounted outside of Plymouth. (*We should not forget the slavery remained legal in New England until the 1780s.)

One of the most notorious cases of gibbeting in colonial New England was that of ‘Black’ Mark (sometimes called Mark Codman), a slave in Charlestown, Massachusetts:

Thursday last, in the Afternoon, Mark, a Negro Man, and Phillis, a Negro Woman, both Servants to the late Capt. John Codman, of Charlestown, were executed at Cambridge, for poisoning their said Master, as mentioned in this Paper some Weeks ago.  The Fellow was hanged, and the Woman burned at a Stake about Ten Yards distant from the Gallows. They both confessed themselves guilty of the Crime for which they suffered, acknowledged the Justice of their Sentence, and died very penitent.  After Execution, the Body of Mark was brought down to Charlestown Common, and hanged in Chains on a Gibbet erected there for that Purpose.

While historians differ as to the proximate cause of Capt. Codman’s murder (and the ultimate cause obviously being the inherent cruelty of owning a person), trial records suggest that Capt. Codman at least once maimed a slave.  Mark was also distraught over being separated from his family, having previously been able to live with them in Boston so long as he paid Capt. Codman part of his wages.  The slaves in the Codman household had previously set fire to their owner’s blacksmith shop in an attempt to force him to sell them, unsuccessfully.

Mark, after consulting scripture, determined that if they did not spill the Captain’s blood, they would be guiltless in God’s eyes, and so Codman’s slaves and several other slaves in the neighborhood conspired to obtain arsenic and galena (a variety of lead) in order to poison him.  After Captain Codman died, an inquest determiend that he had been poisoned by his slaves; Mark, Phillis, and several other slaes were interrogated (likely tortured).   Phillis was convicted of petit treason (treason against a master), Mark convicted of murder after the fact, as was another slave, named Phoebe.  While Phillis and Mark were executed, Phoebe was possibly sent into slavery on Caribbean sugar plantations (which was a different sort of death sentence).  While this sounds ghastly to us (and it obviously is), their sentences were not out of the ordinary for these crimes in that era.

Mark’s body became a grim landmark, of sort, in Charlestown; most notably Paul Revere references the spot in his account of his famous ride, though by 1775 the body had decayed and fallen.

The unfortunate Phillis above was one of possibly only two people to have been executed by being burned at the state in all of New England. The other was another African-American slave named Maria, who was convicted of 1681 of arson in Roxbury (MA).  She was burnt at the stake and the body of another slave, Jack, convicted of a separate case of arson, who had recently been hanged, was cast into her pyre as well.

A short book about Mark and Phillis’s trial and execution was published in 1883.  For more information on gibbeting in New England, see Legal Executions in New England, A Comprehensive Reference 1623-1960 by Daniel Allen Hearn; for more on slavery in Boston, see this link; this article on the iron gibbet held by Philadelphia’s Atwater Kent Museum is also of interest.