There is a contradiction, to my mind at least, between the traditional lore of how ghosts are created (violent murder, tragic death) and cemeteries, which are usually peaceful places where no one lingers too long.

How many murders have really happened in a cemetery?  Nevertheless cemeteries are a magnet for folklore, urban legends, and ghost stories.  Today (and tomorrow) we look at a select number of cemeteries in New England that are thought to be haunted or otherwise have some supernatural significance.  I’ve pulled these from a variety of sources, in print and on-line, and where possible I’ve supplied links.  I have erred on the side of the historical/factual sites rather than the sensationalistic ghost and/or haunting websites since they tend to be nearly information free, unless you count ‘friend of a friend’ tales of the supernatural appealing.

Evergreen Cemetery (New Haven) – Supposedly haunted by ‘Midnight’ Mary, who was either a witch or a woman who was prematurely buried.  Most likely these stories were born from her cryptic and somewhat menacing epitaph.  Lingering by her grave at midnight, according to legend, proves fatal for visitors though there are no actual cases known wherein someone died within Evergreen Cemetery (save perhaps poor Mary herself…)

Four Corner’s Cemetery (Monroe) – Said to be haunted by the ‘witch’ Hannah Cranna.  Cranna, an unpopular woman, was suspected in the accidental death of her husband and kept a rooster she called Boreas that others supposed was her familiar.  As she was dying she instructed that she not be buried before sundown and a whole range of mishaps prevented her casket from reaching the cemetery before then.  Shortly after her house burned to the ground, cementing her reputation as a witch.  Her spirit is claimed to harass visitors to the cemeteries and drivers on the nearby road. 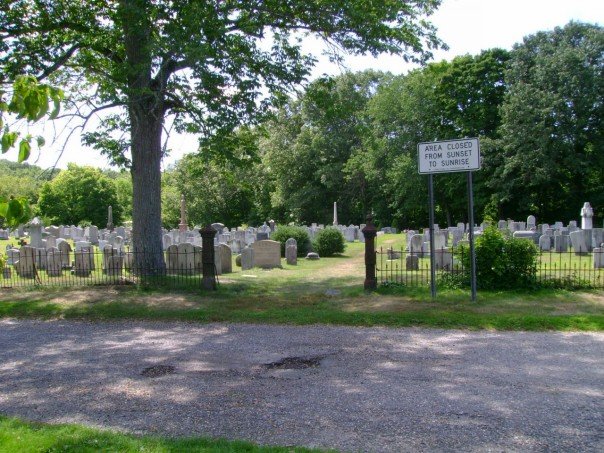 Union Cemetery (Easton) – Allegedly haunted by two different ghost, the ‘White Lady’, a spectral woman in white, and ‘Red Eyes’ who is… wait for it… a pair of red eyes.  The Cemetery was made famous by notorious fraudsters Ed and Lorraine Warren who wrote a book (“Graveyard“) about it.  The White Lady has been said to leave the cemetery grounds to haunt a nearby road and even make her way to another nearby cemetery.

The Old Burying Ground (York) – The ghost of Mary Nasson is said to haunt this cemetery, a story more likely born from her unusual slab-topped grave in the burying ground in York.  She’s typically described as a benign spirit – pushing swings and gathering flowers – despite the fact that there is a folk belief that Nasson was a witch.  Unfortunately there is no surviving information on Mary, save what is recorded on her gravestone.  Her death date of 1774 make me doubtful that the slab was intended to protect the body beneath from animal predation (hence these stones are often referred to as a “wolf-stones”. Some locals claim that the crows that gather about are Nasson’s familiars and a 19th century history of York notes that a house near to the cemetery was said to be haunted until the spirit within was banished to the burying ground.

Dean Hill Road Cemetery (Fitchburg) – Graveyards are harder to move than towns, as it was with Fitchburg’s Dean Hill Road cemetery, which one was near a busy crossroads and tavern.  Today the spot is a mostly lonely one and the little cemetery here became the subject of ‘legend-trippers’ looking for a thrill who have ascribed it all manner of supernatural features without  actually bothering to even learn the places’ name.  Alcohol and historical preservation do not mix and the site was badly vandalized over the years though a group of volunteers helped restore the grounds a few years ago.  I’ve personally been to this graveyard and unlike the credulous nutters who posted supernatural experiences they had in the link above, I found it to be at worst a little lonely and damp.

Quaker Cemetery (Leicester) – Our second ‘haunted’ cemetery that I’ve visited, this Quaker burial ground has become colloquially known as ‘Spider Gates’ cemetery.  Like Dean’s Hill above, the remoteness of this location has helped to foster an utterly undeserved reputation for being not just haunted… but as a gate to Hell (woooooo!!!).  Here’s is a great overview of the place and some helpful debunking of the supernatural tales of ‘Spider Gates’.

Central Burying Ground (Boston) – Not as famous (or old) as Copp’s Hill, the Granary, and King’s Chapel, Central Burying Ground, on the Boston Common is supposed to be haunted.  Cheri Revai reports that a visitor in the 1970s encountered the ghost of a young girl who seemed to stalk him about the grounds.  Older sources note that a pair of statues in the burying ground have often been mistaken for ‘goblins’ at play and that the police were called more than once when they were ‘spotted’ on the grounds.

Old Hill Burying Ground (Newburyport) – This spot in the middle of Newburyport hits all sorts of Lovecraftian key-words.  You have got a hill supposedly rife with tunnels, a crypt repeatedly broken into by ‘vandals’, and, of course, rumors of a ghostly presence.  The tunnels are possible albeit unproven and the oft-violated Pierce crypt is quite real.  As for the ghost, Robert Cahill reports that this cemetery is supposedly haunted by the ghost of Col. Moses Titcomb, even including in his book a photograph of the ‘ghost’ captured by a fellow ghost hunter.  Dennis Boudillion, in the link above, offers evidence that it was no ghost, but a hairy subterranean beast who lurks beneath the very ground of the cemetery.  (This is a joke- it was a groundhog.)

Howard Street Cemetery (Salem) – Our final stop today is in the witch-city Salem, where the ancient Howard Street Cemetery is said to be haunted by the spirit of Giles Corey, one of the victims of the Salem witch trials.  He’s apparently busy between haunting here and cursing the Essex County sheriff.