We’ve covered the ‘haunted’ cemeteries of Connecticut, Maine, and Massachusetts so far, now we turn to New England’s other three states.

Pine Hill Cemetery {aka Blood Cememetery} (Hollis) – Sometimes people read too much into a name and I fear that is the case for the late Abel Blood, interred in this burying ground.  According to local folklore it is his spirit haunts this cemetery, undertaking all the stereotypical  paranormal activity – orbs! equipment failure! – that keeps credulous ghost hunters in business and the police making frequent drive-bys on the lookout for self-terrified teens.  Most famously his gravestone is said to transform with the finger pointing upwards (at right) turning downwards at night.  Unfortunately vandals have destroyed the stone, so all we have now are pictures.  Blood is supposed to haunt the cemetery because he murdered his family (who are also supposed to haunt the cemetery).  Unfortunately there is no basis to this claim – and people would not generally bury a mass-murderer with the family he killed – but that doesn’t make for a fun story.

(There is also a Blood Cemetery in Charlton, Massachusetts.  I have been there and it is also not haunted.)

Gilson Road Cemetery (Nashua) – But a fifteen minute drive from Pine Hill is yet another haunted cemetery, this one is supposed to be haunted by the ghost of Joseph Gilson, or “an insane medicine man”, or a family killed in a fire.  This lack of consistency is a pretty good sign that this haunting the product of active imaginations rather than spirits from beyond.  Signs that this location are haunted include the modern trifecta of pareidolia ghosts – orbs, EVP, and cold spots.

Vale End Cemetery (Wilton) – This cemetery is supposed to be the haunt (ha!) of the Blue Lady, the ghost of Mary (Ritter) Spalding (1773-1808).  The reason why she haunts the place are unclear – some say she was buried alive by her husband Isaac, who quickly replaced her with another Mary it would seem, others say she was murdered by “Satanists”, a mean feat considering she died in 1808, and finally that she died in childbirth or shortly thereafter (a fate so common unfortunately in those days that New England would be filled with spirits should that be enough to create a ghost).

Interestingly (and I’d love to be able to trace the history of this belief) some sources claim that the cemetery or the vicinity is the home of the Pukwudgies, diminutive spirit-creatures of Wampanoag belief, though they are cast in these stories in a far more demonic way than the actual folklore describes them.  They are said to have been drawn here due to a (fictional) massacre of Natives at some point in the 18th century.  None of this is mentioned in historical sources, of course.

Ballou Cemetery (Cumberland) – Due to the historical factors behind Rhode island’s settlement (i.e. it was open to faiths beyond Puritans), families generally had their own burial grounds, leading to this tiniest of U.S. states to having in excess of 8000 recorded cemeteries.  I have seen mention of a few other supposedly haunted Rhode Island cemeteries, but the facts on these are even more sketchy than this one.

Also called Elder Ballou Meeting House Cemetery (and more prosaically as “Rhode Island Historical Cemetery, Cumberland #27”), this is another Quaker cemetery (one source says it was actually Six Principle Baptists) that has become the subject of a supposed haunting(s).  The ghost in question here is the grey phantom of a man, possibly a soldier or former grounds keeper.  The creepiness of the place is perhaps compounded by the row of three hillside crypts (some describe these are receiving vaults, but I doubt it) that are inset in the hillside. Some photos I have seen of the site suggest a certain lack of upkeep; I have found unmowed graveyards are unsettling to visitors, perhaps for some deep-seated psychological reason.  If only that phantom groundskeeper did a better job.

Note: There are also rumors that Mercy Brown, i.e. Rhode Island’s most famous ‘vampire’, haunts her burial site in Exeter, but I am saving her for another post at some future point.  (On a personal note, the ghost of a vampire sounds either like a very terrible name for a Goth band or a monster one might encounter in a homebrew AD&D adventure…) 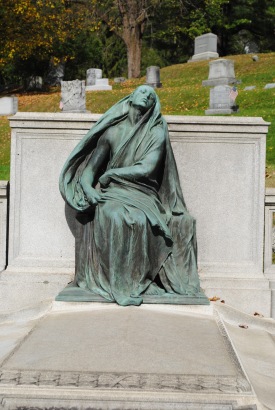 Green Mount Cemetery (Montpelier) – The rolling hills of this ‘rural’ cemetery are the home of ‘Black Agnes’, a statue said to be cursed so that anyone who sits upon its lap will suffer – from simple bad luck up to sudden painful death.

The statue is a part of monument to John Erastus Hubbard (1847 – 1899) a Montpelier businessman who was embroiled in a scandal in the later years of his life regarding another relatives bequest to the city.  For anything you might want to know about Hubbard or his monument see HERE.

The statue itself is not of anyone named Agnes, and in fact is does not even depict a woman.  Indeed it is a statue of Thanatos, the Greek God of Death (not, not the Marvel villain Thanos).  The legend about ‘Black Agnes’ seems to have been imported from elsewhere – there are a number of cemeteries where you can find a ‘Black Anges’.  The original – formerly ‘Black Angus’ – can be found in Baltimore.

Not surprisingly, there are several books on this topic, though I’ve not read any of them… yet: