The Thimble Islands are a small archipelago near the central Connecticut coast.  Mostly made of granite, the islands are the home to a small number of permanent residents and a much greater number of seasonal visitors.

Native people called them Kuttomquosh “the beautiful rocks”.  First charted by Captain Block, of Block Island fame, they were of little interest to anyone beyond fishermen until the 19th century when the nascent tourist industry – gave rise to several resort hotels there.  The islands were badly battered, with little warning, by the Hurricane of 1938; all of the resort hotels were damaged and several occupied houses were entirely swept out to sea. While the great hotels are all gone, the Thimbles remain a tourist spot and increasingly serve as a nature preserve.

There is a local tradition that Captain Kidd buried his treasure (including an attendant pirate executed to guard the treasure forever as a ghost) but this seems to be the invention of hoteliers looking to attract tourist dollars.  Kidd Island, where one of the first hotels was built, was not named for the pirate until the 1840s; before that it was Pot Island. There is also Wheeler Island which is sometimes called Ghost Island but the most I can find out about that name is that its been used by a local brewery for the name of their Double IPA.  Spooky!

The largest island in New England (and 58th largest in the United States), it was originally called Noepe (“land amid the streams”).  The English explorer Bartholomew Gosnold dubbed a smaller nearby island (possibly after his daughter Martha).  Eventually the name shifted over to the larger island.

The first English settlement at Great Harbor (now Edgartown) was established in 1642.  Relations with the Native Wampanoag people were generally quite good.  Many converted to Christianity and, unlike their coreligionists on the mainland, they remained free during King Philip’s War.  While their numbers sharply declined over the next century, this was due more to loss from disease rather than violence and deportation.  Today there is a recognized Wampanoag tribe in Aquinnah (Gay Head) – the only fully recognized grouping in New England – with more than 1100 members.

The island’s economy was initially agricultural, shifting over to fishing and especially whaling in the 19th century.  Until the discovery of petroleum just after the American Civil War, which replaced whale oil, the whaling industry brought great wealth to the island.  The houses and mansions these fortune’s built remained and were eventually repurposed as the island shifted to become a tourist economy in the later part of the 19th century and especially after World War Two, when the island’s reputation as a summer resort, especially for the very rich, was cemented.

One unique feature to the island was the development of Martha’s Vineyard Sign Language (MVSL). Several families on the island bore a recessive genetic trait for hereditary deafness and as they intermarried, the instance of deafness on Martha’s Vineyard became much higher than in the outside world – in some places, like the town of Chilmark, as many as 1 in 25 people were deaf.  The signing system was used by many non-deaf people as well, often as a way to communicate when circumstances forbid it (like in church or in school).  The signing system developed from a now-lost method called the Old Kentish Sign Language and later French techniques, creating a unique system of communication.  The combination of increased marriage to outsiders along with the rise of deaf education in the United State in the 19th century reduced the number of people fluent in MVSL – the last deaf speaker died in 1952, though non-deaf speakers recalled some parts of it into the 1980s when it was studied by academics. 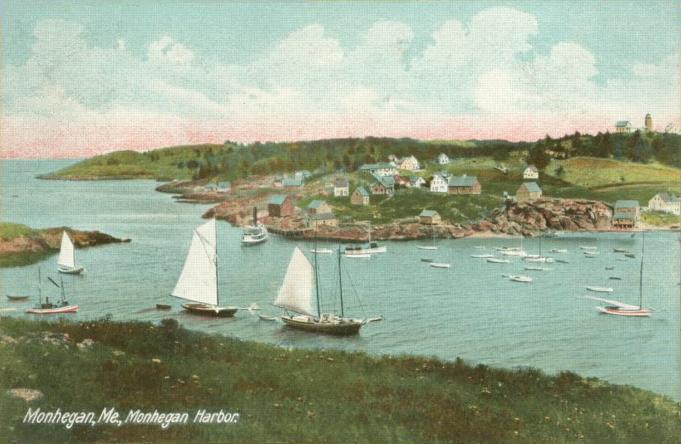 Called Monchiggon (“out-to-sea island) in Algonquin, this small (4 1/2 square mile) island off the Maine coast was the site of one of the first English settlements in North America, though initially it was only a temporary fishing camp and trading post.  Control of the island transferred between the French and the British several times in the 17th century.  The whole settlement and fishing fleet were burned by the French in 1689 and the island was abandoned for a time.  It would not be until the end of the Seven Years War / French and Indian War for the settlement to be considered secure.

A lighthouse was built in 1824, later replaced by a larger on in 1850.  There was a notable artist colony here in the later 19th century.  Today the island has a permanent population of just 75 (down from a peak of 120 in 1930), though this grows every summer as day tourists come to see the island’s great natural beauty.  Drake reports that there was a supposed Norse inscription on the island but even he suggests it was “not of archaeological significance” (i.e. bogus).

Monhegan Island is of note to Call to Cthulhu players due to the scenario “The Horrible Secret of Monhegan Island”, the sole CoC scenario published by Grenadier Models in 1984.  Regrettably the Monhegan Island of the scenario bears little to no resemblance to the historical island.  (The other Maine island scenario I am familiar with – “The Singer from Dhol” is set on the fictional ‘Oyster Island’.)

Tomorrow – Our island tour ends with Nantucket and more