Our (unexpectedly long) tour of New England’s islands with two of the largest and most well-known, with a brief recap of the other island for which we lack time to cover more fully.

Inhabited for at least the past 6000 years, Mount Desert Island was called Pemetic (“the sloping land”) by the Wabanaki people.  Samuel de Champlain visited the island in 1604 looking for Norumbega (see October-ganza Day 7 for more info on that) and it was he who gave the island by the name we know it by today, though a more accurate translation for “l’Isle des Monts-déserts” is “Bare Mountain Island”; there is no ‘desert’ here. (There is a ‘desert’ of a sort in Maine – see here for more info.)

French Jesuits established a colony here in 1613 that was raided and destroyed by the English in that same year; for many years the stretch of Maine’s coast between English Bristol in the south and French Acadia in the north was generally unsettled save for scattered French trading posts.  After the defeat of the French in Quebec in 1759, France’s colonial claims in North America passed to the British and settlers, mainly from New England, began to settle the area.  A settlement was created at Somesville in 1761 and slowly other settlers began to populate the island, a process that accelerated in mid 19th century the island’s reputation for natural beauty drew many of the New England and New Yorks’ wealthiest families who could summer here and build rustic mansions amide the pines.  Today the island has a year-round population of about 10,000.

The island is most famous as the home of the Acadia National Park, established as Lafayette National Park in 1919 but renamed Acadia 10 years later.  The park is a natural reserve filled with wildlife and points of natural beauty.  In large part the creation of the park was spurred on by the Rockefeller family and their fortune, in particular the extensive road system that provides access to the millions who visit every year.

Local legends, like on so many other of New England’s islands, claim that Captain Kidd buried his treasure here; ghost stories abound as well.

from Nooks and Corners of the New England Coast (Samuel Adams Drake, 1875)

Famous for more than being home to the infamous man of countless limericks, Nantucket is the second of Massachusetts’ two largest island.  Called Natockete (the precise meaning is unclear, possibly “between the waters” or “distant island”) by its Wampanoag inhabitants.  English settlement of the island began in 1659 when the whole of the island was divided between a few dozen shareholders, many of whose families became the island’s leading figures.  Quakers were an especially important group on Nantucket, leading some to paint the island as pacifist during the American Revolution and the War of 1812.  Even more so than the larger island of Martha’s Vineyard, fishing and especially whaling was central to the Nantucket economy and the collapse of that industry sank the island into a deep recession in the second half of the 19th century.  (For reference, the 1830 US census recorded 9012 inhabitants of the island.  In 1920, the lowest point, it was 2797.) 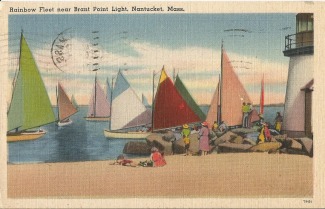 This developmental stagnation helped to fuel the island’s reputation as a quaint summering spot, with its colonial architecture and weathered saltbox houses still extant long after they had been razed elsewhere.  The island became, especially after the Second World War, a summer holiday spot for the wealthy.  While the year round population is nearly 11,000 people (and swells to 50,000) many of the life-long inhabitants complain that they are being priced off the island by wealthy newcomers.

Nantucket (like Martha’s Vineyard) is said to have been formed by Moshup (we mentioned him back on Day 4), though in Nantucket’s case it was created when he dumped the ashed from his great pipe into the ocean.  (Did I mention the bit where he turned all his children into fish?  If only there was some way to use that in Call of Cthulhu…)  Another Wampanoag legends says that Nantucket is where the giant bird who ravaged Moshup’s children dropped their bones.  I am personally fond of Blue Balliett’s Nantucket Ghosts, a ghost story collection that sought out first hand accounts of haunting rather than ‘friend of a friend of friend’ (or more honestly ‘cribbed from other books or wholly made-up’) stories you often get.