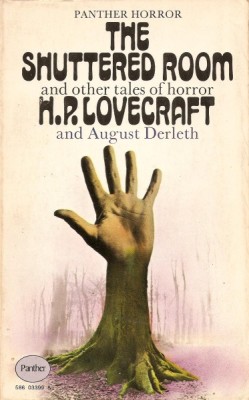 The cover of the 1970 Pather reprint.

This story first appeared, like our preceding entry, in The Shuttered Room and Other Pieces (1959).  Chris Jarocha-Ernst plausibly suggests (in this case as per Joshi) the story was inspired by Lovecraft’s Commonplace Book entry #60:

Fisherman casts his net into the sea by moonlight — what he finds.

It is also the shortest of the so-called Lovecraft/Derleth collaborations, at just five pages in my Del Rey edition of The Watchers Out of Time.  If  you are looking for a small taste, so to speak, of Derleth’s Lovecraftian pastiche work, I recommend this story as a good starting point, both in length and in general quality.

Like “The Shuttered Room” from last week, you can listen to this story, once again read by Allen Kent:

It was hard not to think of this guy while reading this story.

Told as folktale, of a sort, we begin with a bit of framing about our titular fisherman, one Enoch Conger, about whom “many things are whispered”… including this story it would seem.  Conger is a New England fisherman straight from central casting – taciturn, hard working, salt-coated.  One evening he reluctantly shares a story with his companions at the tavern on the edge of Innsmouth (?!) about a strange discovery he made while pulling up his nets off Devil Reef – a woman, of a sort, but with scales and webbed hands and feet, whose mouth was a long slash across the face but with expressive, almost human, eyes.  She begged to be released, promising to save his life at some future point.

Conger’s story is met mostly with derisive laughter, though at least one patron did not laugh as he “had heard strange tales of certain things known to old men and women of Innsmouth”.  Thereafter Conger avoids the tavern, mostly, preferring his own company and pensively staring out at the ocean.  Years go by and the tale of his mermaid encounter has been told far and wide to the amusement of many.  One day, Conger’s ship is found and he is discovered to have been seriously injured; at his request he is carried back to his small house at Falcon Point where he is placed awaiting the arrival of a the doctor.

The prints of Tides?

When medical help does arrive, Conger is nowhere to be found, though a trail of wet footprints, webbed naturally, I found in his now-abandoned shack.  Conger is never seen in Falcon Point again.  He is seen, however, in the waters off Innsmouth.  He is first spotted by Jedediah Harper, the nominal head-man of the village, who caught sight of him swimming with a school of fish-frogs… oh who am I kidding, they were deep ones… naked and singing hymns to Dagon.  Harper and his crew’s silence on the matter is soon purchased by some hybrids from the Marsh or Martin families.  On another occasion Conger is encountered by a fisherman, the old man rising up out of the water only a stone’s throw from his boat, changed in certain ways to better live in his new home.

And that is the end, aside from some boiler plate about how “many things are whispered about Enoch Conger – and certain others are hinted at in low voices”… nary an italicized word in sight.  Huzzah.

We have our first ‘collaboration’ that was wholly embraced by the writers of Chaosium’s Lovecraft Country line.  Falcon Point and Enoch Conger appears in Escape from Innsmouth – entry I1010, which describes Falcon Point and Harper (and very briefly recapitulates Conger’s story).  Dr. Gilman does not make an appearance, in this book at least.  Falcon Point appears in at least one other scenario (“Bless the Beasts and Children” in Adventures in Arkham Country) – which includes a more detailed map of Falcon Point (and adds several locals not mentioned in the story).

Derleth briefly name-checks a few other Lovecraft Country towns, noting that Conger’s odd tale of the “mermaid” spread to Arkham and Kingsport and up the Miskatonic to Dunwich and “even beyond, into the the dark wooded hills where lived people who were less inclined to make sport of the tale”… unlike Dunwich, where live Massachusetts’ least credulous and superstitious folk?

We finally have one – a story I didn’t hate.  This is not to say I loved it, of course, but it was wholly adequate – a C- story all the way.  It did raise several questions about the deep ones that suggest Derleth and Lovecraft did not see eye to eye on certain significant points.  On the other hand, there are a least seven falcon species that have been observed in Massachusetts, so we can at least say Derleth got that right, yes?

Derleth’s deep ones are rather more friendly than Lovecraft’s

Derleth’s version of Innsmouth and the deep ones (is that capitalized?  I can never decide) is rather more genteel than Lovecraft’s.  Jedediah Harper and his crew’s were bribed to stop spreading their tale of spotting a changed Conger swimming with a school (what do you call a group of deep ones?  A croaking?  An Obed?) of deep ones swimming off Devil Reef “by certain of the Marsh and Martin clan” whereas in “The Shadow Over Innsmouth” even people in Newburyport were reluctant to talk about Innsmouth and we hear mention of “more’n one business or government man that’s disappeared there, and… one who went crazy and is out at Danvers”.  I seems rather generous of the Esoteric Order of Dagon to bribe Capt. Harper and his crew rather than just threatening them or even killing them. Derleth’s “mermaid”, who I presume is a mostly transitioned hybrid as she still has hair, likewise is far from hostile to the fisherman, upholding her promise to help him at some future point if he would release her from his nets.

Turning to more minor quibbles… while the precise era is unclear, why is there a tavern on the outskirts of Innsmouth?!  How are so many patrons able to disregard Conger’s story?    This story must presumably take place between 1846 and 1928 (as there is no mention of the Raid, but clearly this is after Obed Marsh and the Esoteric Order of Dagon seized power.

Ultimately I suspect that this was just a Mythos-enhanced version of the fairy tale “The Fisherman and His Wife“, minus the wife and all the wishes.  Derleth wanted to keep up the aura of a Lovecraft story so he set in near Innsmouth rather than in Innsmouth proper, as he has done with every one of the collaborations so far.

Another opinion (I couldn’t find as many this week):

For once, there isn’t any forehead smacking turn of phrase… though the whole tavern on the outskirts of Innsmouth really irritated me.  Ugh.

4 thoughts on “Derleth Country #5 – The Fisherman of Falcon Point”