When the throng had mostly streamed into the porch, the sexton began to toll the bell, keeping his eye on the Reverend Mr. Hooper’s door. The first glimpse of the clergyman’s figure was the signal for the bell to cease its summons.

“But what has good Parson Hooper got upon his face?” cried the sexton in astonishment.

Truth, they say, is stranger than fiction… but what are we to make of those times when fiction has replaced truth?  What then is stranger?  In the case of the Reverend Joseph Moody, who lived in York, Maine during the first half of the 18th century, we have an example of where a fictional version of reality has become so attractive that it has superseded the truth.

The facts commonly repeated are these – that Joseph Moody, son of Reverend Samuel Moody, was born in York, Maine in 1700.  He graduated from Harvard in 1718 and returned to York where he served not only as a minister, but at various points as the school master, county clerk, registrar of deeds, and as a judge.  Aside from his time at Harvard and the occasional short trip to Boston, Moody lived his whole like in York, dying there in March of 1753.

Moody’s remarkable eccentricity, for which he is known today, was his decision – the motives and timing of which varies depending on the teller – to cover his face in public with a silken handkerchief.  Some accounts claim that Moody was stricken with guilt having accidentally killed a friend as a youth and either covered his face ever after as penance or took it up before becoming a minister as he felt unworthy of the office due to his sins.  Others claim that his inspiration was a failed romance in which a woman he was courting refused him to marry a dashing military officer. 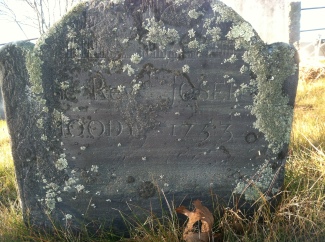 The historical record offers an entirely different story – that Moody took to covering his face after his wife’s death in childbirth in 1738, that the period of his covering his face was relatively brief, perhaps not more than a few months, and that his motivation was more likely due to emotional exhaustion and anxiety rather than some deep-seated sense of guilt or shame.  The face-covering incident seems to mark the start of Moody’s general withdrawal from his public duties for a period of more than a decade.

Moody’s case, as is to be expected, was a story that was often told across southern Maine and points beyond.  One such person who heard Moody’s story was Nathaniel Hawthorne who encountered it during a visit to Maine in the 1820s  He then immortalized Moody in his story “The Minister’s Black Veil“, first published in 1832.  The true facts of the case, however, were already clouded even within a few decades of Moody’s death by the 1893, when Charles Skinner is writing his extensive Myths and Legends in Our Own Land, the historical Moody has almost been entirely replaced by Hawthorne’s veiled minister.

For today’s entry in our October-ganza, I thought I would look at Rev. ‘Handkerchief’ Moody, Hawthorne’s fictionalized version of his story, and some hints that the Moody story (either the historical or fictional versions) inspired H.P. Lovecraft’s malign creation The High Priest Not-to-be-described.  This got a little long, so I’ve split it into two parts.

We’ve already gone over the rough outline of Moody’s life; for a good summary which highlights some of the ahistorical details that have crept into things, see Richard Bowen’s account here.  In addition to is unusual sartorial choices, Moody is also remembered for keeping a diary, in a Latin cipher, from August of 1720 to October 1724.  Some highly edited excerpts were published by Maine Historical Society in 1891; here is a sample for the fall of 1723:

(We should point out that the account of Rev. Moody given in the above article repeats the disproven notion that he took up wearing a veil due to the accidental murder of a childhood friend.)

[Rev. Samuel] Dexter was here.  I mounted my horse late.  Before sunset, by Divine Providence, which I had supplicated, I found my Beloved [then fiancée Lucy Wright] at her grandfather’s (at Ipswich) and there I lodged.  Captain Briant was her to consult [Rev. John] Wise about the schisms in the Second Church in Reading.  That night, while half-awake, I defiled myself.

Moody’s diary does not cover the period during which he veiled himself (which occurred a decade after this diary was recorded) but it still provides a unique look at life in early 18th century Maine – intimately connected to the larger Massachusetts Bay colony to the south, but with the troubles and fears of the frontier.  It also serves to highlight the humanity of a man from a era similar but quite distinct from our own.