Two New England Cults: ‘The Live For-Evers’ and ‘The Church of the End Times’

One plot staple of Call of Cthulhu (and in many other Lovecraftian RPGs and Lovecraftian fiction) are cults – so much so that we had a yet-to-be-concluded (sorry!) series talking about creating your own for the game.  While ‘cult’ can be a very loaded term – definitions of what differentiates a cult from a religion or social movement can be tricky – I think the term is too useful to abandon and I find it an efficacious catch-all for organizations which investigators come into conflict.

I thought today I might share two real examples of cults that operated in New England, one in the 18th century and the other in the 21st, to inspire your own creation (or to be cribbed from liberally).  While neither of these groups was as dangerous or malign as the worshipers of the Great Old Ones might be, with a little adjustment, they could prove quite gameable.

This was a Christian cult in 18th century Massachusetts, apparently centered around the farming village of Sutton, located in the Blackstone Valley, between Worcester and Providence, RI.  Edwin Valentine Mitchell’s It’s an Old New England Custom offers a general account of the cult:

From the history of Sutton, Massachusetts, for example, one learns that there once existed in that town a sect known as the Live for Evers.  They thought that if you seemed to be dead, faith accompanied by certain manipulations by the faithful would restore you to life, and this part of their faith is what gave them their name.  But they had other views of a more original and peculiar kind.

They believed that, like Adam, every man had a wife made from one of his own ribs, and there was great danger of trouble if he got the wrong one for his spouse, though it is not clear how he was expected to know the right one when he met her.  Evidently it was purely a matter of trial and error.

At any rate, the female Live for Evers had definite ideas on this point, for some of them got the notion that they were misplaced and carried the idea to the extent of misplacing themselves in their own beds by putting the pillow for the man at one end and that for the woman at the other.   Some even went beyond this and, becoming dissatisfied with their mates, sought their affinities.  To discuss and adjust their difficulties they held evening meetings at each other’s homes.

Among the restless ladies of the group were Mrs. Lucy Fletcher and her sister, Mrs. Miner.  The latter ran away, but whether she went to her mother’s or took to the road with some itinerant bellows mender, the record is silent. In any case, her husband pursued her, and it is said that it was only with the greatest difficulty that he persuaded her to return.  As for her sister, Lucy Fletcher, her husband, Ebenezer, came home one rainy night to find the Live for Evers holding a meeting in his house.

He had no sympathy with their views and ordered them to leave, but, pleading that it was raining, they refused to go, which made Mr. Fletcher very, very angry.  “If you fear rain more than fire,” he cried, “you can stay.”  And, seizing the fire shovel, he began to throw hot embers and live coals from the fireplace around the room among the crowd.  This rain of fire drove them from the house, and Ebenezer, having extinguished  the brands, went to bed.

The sequel came a few days later when he went to the neighboring town of Grafton with his oxen and tipcart.  From this journey Mr. Fletcher never returned alive, as he was found lying dead in the road, and it is supposed that he was murdered by the Live for Evers.  No record of his death, however, could be found by the historians of Sutton, but the date of the marriage of his widow to John Goodale was discovered to have taken place on December 12, 1781, and this, perhaps, is as near as it is possible to place the unfortunate Ebenezer in historic time.

Mitchell’s main source is most likely this 1878 history of Sutton; here’s a link to their version of the Live For Evers.

The Church of the End Times

Not far from Sutton, though more than two centuries later, is the Church of the End Times was (and apparently remains) a charismatic Christian sect founded by brothers David and Dennis Stanley.  Starting in 2005 the apocalyptic-focused church is alleged to have served as a front for what is an effectively acriminal enterprise, which fleeced congregants, dodged state and federal taxes, encouraged open sexual relations between certain (female) church members and the Stanely brothers, and fueled a bogus driveway paving company (there is a reason the “church” is sharing a sign with “Driveways Corporation”).

As the Worcester Telegram described them in 2012: 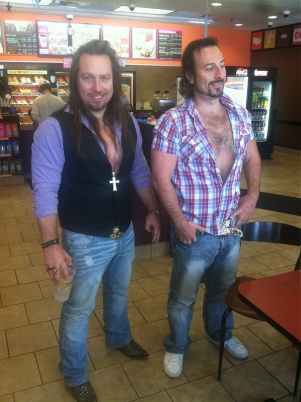 David Stanley, 40, tells followers he is an anointed prophet and an archangel and that his brother, 36, is a “half-breed” angel, according to Dennis’ wife, Beth.

David, who has no formal theological training, like many evangelicals, is the pastor; Dennis is the DJ.

When police arrested the brothers two weeks ago at Dennis’ $500,000 house on charges stemming from violation of a restraining order taken out by Beth Stanley, David bellowed to police about not bowing to men, banishing the demon and that he did not recognize the police’s authority.

“It’s all coming from my ex-wife,” Dennis said. “She’s trying to make me look like a moron. If she can’t have me, she’s trying to destroy me…”

None of this is particularly unique in the world of Evangelical Churches and fringe religious moments, legit or otherwise, where the requirements to proclaim oneself a prophet or preacher are exceedingly low.  But here the confluence of dodgy apocalyptic evangelism, sexually and financially exploited followers, a long-con based on not just a church but a crooked driveway paving company as well, and self-proclaimed Nephilim who dress like WWE wrestlers at a bail hearing makes we wonder what harm the Stanley brothers, or someone very much like them, could do with the unspeakable horrors of the Mythos.