Derleth Country #10 – The Watchers Out of Time

This story first appeared in The Watchers Out of Time (1974), Arkham House’s collection of Derleth’s alleged Lovecraft collaborations.  It was unfinished at the time of August Derleth’s death and, as such, is somewhat difficult to discuss as a complete tale since it ends rather mid-action, or mid-research at least.  I fear I am being disrespectful of the dead when I’ll admit this, but it is better than some of Derleth’s tales he actually completed.  Perhaps that is due to the fact I might still imagine interesting directions the story might take rather that the all-too-predictable conclusion I suspect it would have had should Mr. Derleth lived long enough to finish it.

We’re back in Dunwich, again, when our protagonist inherits the de rigeur ancestral manse loaded with occult secrets.  It is 1935 and Mr. Nicholas Walters, our Oxford-educated victim, err, protagonist has inherited some property in “north-central Massachusetts”… technically it was his late father Charles who had inherited the property but due to some bureaucratic mishap, the notification was delayed by the better part of a decade.

Alternatively he could be a Margaret Keane painting.

(The younger Walters, with “curiously lobeless ears”, “wide mouth”, and “large pale blue slightly bulging eyes”, might be being set up for some sort of Innsmouth linkage (as per “The Shuttered Room” since he’s related to the Whateley family) but this plot line never develops.  It seems just as likely his father’s noted unease is due to other family resemblances hinted at later.)

If this sounds familiar, the plot is almost identical to “The Horror from the Middle Span” (and is only a bit off “The Shuttered Room”) – an Englishman inherits old house in Dunwich, gets ominous warning from Tobias Whateley, finds house curiously untouched since mysterious ancestor died, blithely ignores feeling of dread, finds some obvious evidence of the occult they ignore… you get the picture.

Nicholas Walters feels an inexplicable draw from his heretofore unknown family home in America and, after a paragraph or two, had booked a flight to the United States.  (You may wonder when regular air service started across the Atlantic.  It was 1938.  Unless Walters took one of the earlier seaplane routes.  Or enjoyed a flight on the Graf Zeppelin.  Or hopped on a shantak and swigged a great bottle of space mead.  You never know with Derleth.  Once across the Atlantic, Walters makes his way to the law offices of Boyle, Monahan, Prescott, & Bigelow where Mr. Boyle runs through the necessary exposition about Dunwich and the home that Walters has inherited, as well as offering some explanation why it took seven year for the news about the inheritance to reach him.  It would seem Aberath Whateley (we’ll get to that name) died seven years passed and had previously retained Boyle’s brother, also an attorney, to draw up a will and that the brother, in ill health, neglected to inform the Walter’s of their windfall.

(Aberath is not a name in any sort of usage.  Daberath is a place mentioned in the old Testament near Mount Tabor; one source I looked at noted that root of the name ‘dabar’ דבר (dabar), meaning “word”, “name”, or “thin

g” and often with a layer of meaning including “being behind or coming later or as a consequence”.  This might be related to the title of the story but we cannot be sure.  There is also a village of Aberarth in Wales, but I’m unaware of any occult connection there.)

Anyway, Walters drives from Springfield to Dunwich where be stops, of course at Dunwich’s “sole mercantile establishment” Osborn’s general store, where for the third time we encounter portentous hint-dropped Tobias Whateley.  He unsubtly lets us know more about Aberath Whateley’s old place and Walter’s resemblance to him and other Whateley’s.  Tobias continues to speak in the “High  Lovecraftian Yokel” phonetic dialect much to the regret of my eyes.  “Ye’ll be eddicated too, ye look it”.  (Shudder.  Oh, and he tain’t ne’er heerd ov “Oxford”, by gum.)  Tobias gives him directions to his inherited mansion; he also informs Walters that there is no one living at Aberath Whateley’s old place these days.  Yes, somehow he speaks in Italics.

What follows is a page and a  half description of the house… which is somehow gambreled but acts as it was Federal!… just kidding, it is of 18th century construction, loaded with books and other odds and ends, all left as if Aberath Whateley had just stepped out to join the local black sabbath or hill-top rites.  Not that anyone is up to anything odd in Dunwich.  They’re just simple rustic people with archaic traditions.

That’s it.  So, as you do in a weirdly appointed, and inexplicably cared for abandoned house you just inherited, you tromp about and take photos of all the quaint architectural features, say, a clock that keeps track no just of minutes and hours but others things too… (phases of the moon? calories? the location of  each member of the Osmond family?  Derleth makes is spooky sounding but unfortunately never gets back to it).  Oh, and an the elaborate mantelpiece with a large milky glass sphere fixed at the center.  That’s totally normal.  It’s periodically glowing?  Surely a natural phenomenon.  Click click click.

The source of the glow he had seen was the glass eye in the carved triangle above the fireplace.  It was clouded, opalescent; it seethed and swirled with movement, spilling a pale light into and across the room; it was as if some life within reached out to make itself manifest. 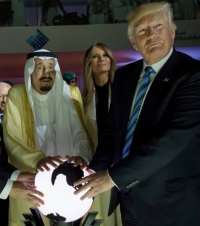 Why oh why can’t Derleth’s protagonists respond to something obviously supernatural with anything other than implausible dismissal?  Good old Walters does his damnedest to ignore the weirdly glowing orb and the fact that he can see, in a photograph of the glass orb two tiny faces, an evil looking bearded guy and a “hawk-nosed” brown-skinned fellow, clean shaven.  Must be a trick of the light.  A fragment of an underdone potato.  Ooops, sorry, nearly slipped into full Scrooge mode there.  Did I mention the carving in which the orb… which he keeps calling an eye… is housed looks, in certain lights, like a giant octopus head.  That’s a very traditional New England motif – occult-themed giant cephalopods set with a crystal ball.  And when you look into it, you feel as if you’re plunging into an endless void.  Nothing to see here, so lets move along.  Off to bed Walters; don’t let the feeling that the house contains an unnatural presence that is watching him or the unusual sounds and sights from Dunwich’s monolith-topped hills keep you from sleep.

The next morning it is time for a quick trip to Springfield… which is probably 70 miles from Dunwich’s approximate location (see below for my rant on this) to consult the library there.  The librarian there, Clifford Paul, knows an exceptionally large amount about the Whateleys of Dunwich and even has a handy reference pack to consult, as librarians are wont to do about secretive occultists and fallen once-armigenerous families partially fallen into cousin-marrying and witchcraft.  Walters finds all sorts of hints he is a descendant of the Whateley family though he probably won’t accept this for a couple of (never written) chapters.  He also finds a partial recapitulation of “The Dunwich Horror” and some notes about a wholly unneeded second preacher (Jeptha Hoag) who preached against voices in the hills and dark magic who shortly thereafter vanished.  At last, Walters drives back to Dunwich, where he discovers the sitting room (with orb) rearranged and a letter addressed “For Him Who Will Come”, “For Charles, or the son of Charles, or the grandson of Charles…”

There isn’t much to say about this as a story per se, since it seems to be a rehash of bits of “The Shuttered Room”, “The Shadow in the Attic”, and “The Horror from the Middle Span”.  Compounding that is the fact that the whole thing is unfinished, leave me with little to say I’ve not already said.  As far as I can tell there wasn’t even a Commonplace Book entry even connected to it, so the Lovecraft content is effectively nil.

As a former Massachusetts resident, I’ll admit a mild bit of annoyance that the narrator drives from Dunwich to Springfield in order to conduct his research.  First off, Dunwich is likely in Worcester County (unless we place it as Chaosium does in Aylesbury County), and historical records would likely end up in the town’s county seat rather than

Springfield.  Aylesbury is RIGHT THERE Auggie.  Use it.  Hell, he even mentions the Aylesbury Transcript newspaper, so we know he didn’t forget about it entirely.  Considering the story is set in 1935, driving the seventy or so miles to Springfield would be a rather time-intensive endeavor of a few hours each way and yet Walters goes to Springfield and back in what seems to be a single day AND conducts lots of research.

As to the reams of files he is helpfully given by Clifford Paul at the Springfield library, who organized these?  It is suggested they were collected to be included in the 1920 ‘county history’ he consulted but were for some reason omitted.  Dunwich, according to Lovecraft, was an almost abandoned town.  Who would be writing lengthy family histories hoping to have them included in a country history? Considering the poverty and isolation of Dunwich, a town history seems highly unlikely.

Osborn’s general store, once again, is operated by professional ominous hint dropper Tobias Whateley, whom Keith Herber studiously ignored.  Likewise Aberath Whateley, his mansion, and the curious Increase Brown, all are omitted from Return to Dunwich.  Keith also wisely ignored Derleth’s mention of the Abijah Hoadley knock-off Jeptha Hoag and the Baptist church of which he was minister.

Honestly I would be interested to learn more about Increase Brown, as the first person of color we’ve run into in any of Derleth’s stories.  He might not ever have been human – I’d bet he was a familiar due to the inclusion of Brown as part of his name and Derleth typically cribbed names from similar characters, even if “Brown Jenkin” was more a descriptor than a personal name.  Still, I’ll give Derleth points here for piquing my interest.

He concluded finally that Boyle’s casual references to the strangeness and remoteness of Dunwich might have been in references to certain customs of the inhabitants; and of these whatever was going on in the hills might well be one.  He shrugged himself free of further concern, and went into the house…

Coming next (eventually)… “The Whippoorwills in the Hills”!