Lovecraft made use of the name Dagon, in a short story of that name and also in “The Shadow Over Innsmouth” as the name of the warped religion imported into Innsmouth by Obed Marsh and his disciples.  While the name Dagon itself comes to use from the Philistines (by way of the Bible), Lovecraft’s use of that name is also rooted in New England tradition.  Here today then are three other instances of Dagon in New England in history and fiction (if you’re interested in Dagon in the Old Testament and in Near Eastern religion, we talked about that in issue #2 of the Arkham Gazette – soon to be reissued!)

Initially called Mount Wollaston, this trading outpost in what is now Quincy, Massachsuetts was directed by the merchant and adventurer Thomas Morton, a liberal thinker for his day, opposed to the Puritan’s oppressive theology and dismissive regard for the Native peoples they encountered.  Morton attempted to organize the settlement along more egalitarian lines than his neighbors, without slaves or indentured servants, an explicitly trying to draw local Natives (especially women) into the community.  One method Morton encouraged was to hold revels, modeled after the traditional May Day celebrations of his home county of Devonshire, including an enormous May Pole.  These drunken celebrations were anathema to the Puritans who thought them Papist, possibly Pagan.

Morton seemed to desire conflict with them, even changing the settlement’s name to Mare Mount (after the Latin word for the sea), likely an intentional pun considering how close the it sounded to the word ‘merry’; both Mare Mount and Merr Mount were used interchangeably.  At his second May Day celebration, Morton invoked the names of various Greek gods, including Neptune and Triton.  This, combined with the drinking and (often sexual) merry making was too much for the Puritans at at nearby Plymouth.  A month later the Plymouth militia seized Merrymount.  Morton was arrested (and exiled to the Isle of Shoals) and the place was derisively renamed ‘Mount Dagon’ to condemn what they viewed as heretical activities there.  The colony faltered and soon died with Morton’s leadership and funding; the Puritans made sure to complete the task and burned the remnants to the ground.

While Morton eventually escaped exile and eventually returned to New England, Merrymount aka Mount Dagon was no more.  (We note that Morton was part of the social circle of London’s Mermaid tavern…)  The events at Merrymount have inspired writers, including Nathaniel Hawthorne’s “The May-Pole of Merry Mount“, and some have embraced Morton as an early advocate for social and sexual liberation.

Dagon-stones and the ‘JN Carver’

Mer-people and others of Dagon’s ilk were not just found in Merrymount but in Boston six decades later, when 20th century student of colonial gravestones (taphologists) noticed a clustering of tombstones in the Boston area, all from the same then-unknown carver, and all depicting a half-person, half-fish creature, like the Triton or mermaid of mythology. Harriette Forbes (mother of gravestone studies) called them “Urn and Mermaid Stones”; Allan Ludwig, writing forty years later dubbed them “Dagon stones“. 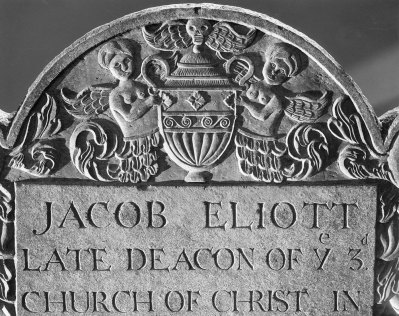 Modern scholars have likely identified the carver of all these stones (only signed ‘J.N.’) a John Noyes, a Boston silversmith an artisan who likely had a side business in gravestone carving; see David Watter’s definitive survey of the topic in Markers II (p. 115-132; 1983.  Noyes’ customers were often members of the silversmith community, their families, or those from allied trade, showing a social component to his work (i.e. he made stones for those he knew more so than for unknown strangers).  There mermaid imagery used on these stones fits well in what we know about the Pagan symbolism common in colonial silver good – familiarity with Greek and Roman myths suggested education on the viewer’s part, not public or secret Pagan worship.  ‘J.N.’ also used the classical mourning symbols of urns and peacocks, predating the 19th century ‘willow and urn’ stones by more than a century and a half.

Our final stop on our tour of Dagon in New England is this 1927 novel by Herbert Gorman.  The story, about atavistic remnants of the witch-cult being discovered by a well-meaning but mostly hapless doctor, was liked by Lovecraft and he spoke well of it in his Supernatural Horror in Literature.  Modern readers give it more mixed reviews than Lovecraft; the curious can now easily pick up a copy thanks to Hippocampus Press.

(While I am not read it, it would seem this ‘Dagon’ was more Paganistic rather than aquatic.  Nevertheless, it was an influence on Lovecraft even if its depiction of Marlborough is fundamentally off…)