Interview – A Peek Inside “An Inner Darkness”

Last week our friends at Golden Goblin Press launched a new Kickstarter project for their next release, a Classic-era scenario collection called An Inner Darkness.  As they describe the project:

This is collection of Classic 1920’s era scenarios of 7th edition the Call of Cthulhu Roleplaying Game… [will consist of] well researched, historically accurate and challenging adventures, with a slightly darker, harsher and more brutal tone than our fans might be used to…

These scenarios will of course feature the malignant taint of the Cthulhu Mythos, but at the forefront of each will be one or more examples of social injustice, societal corruption, and mankind’s inhumanity to man. The 1920’s was a period of great social upheaval in America, when the borders between classes, races, and genders were changed. In this time of social upheaval and chaos, eldritch forces found fertile ground to exploit us. Mankind is never so vulnerable than when we are divided from within.

I personally backed the project, as I have with most emanations from the Goblins’ Lair, but as there are two, possibly three, scenarios set in Lovecraft Country/New England, I thought I might attempt to learn a bit more about those elements in particular as I suspect they are of particular interest to readers of the Arkham Gazette.  I reached out to the head goblin, Oscar Rios, and he passed along my questions to the writers and editors of the book.  Here is what they said (I’ve noted who each reply originated from):

Question 1:  What’s your ‘elevator pitch’ for the book?

[Jeff Moeller] – This is a scenario book set in the United States in the 1920s and 1930s. Each scenario is set against a backdrop of an actual, historic social issue of the times which has not received much attention in prior publications. Historical accuracy is at a premium. Jeff Moeller is our editor, and the authors are all top-notch: Brian M. Sammons, Helen Gould, Charles Gerard, Christopher Smith Adair, Scott David Aniolowski, Oscar and Jeff. At the same time, these are Mythos stories. The social issue backdrops are heavy topics: treatment of war veterans in the 1920s; the Tulsa Race Riots; the KKK’s persecution of Catholics in Maine; the 1931 Mexican “repatriation” in Los Angeles (and its jail system); reproductive rights; “radium girl” type sweatshops; and Scott’s stretch goal which is touched on below.

Question 2: One of the core scenarios for the book is Brian M. Sammons’ “When This Lousy War Is Over”, is set in Arkham and involves veterans of the Great War.  While investigators often play veterans, that rarely directly comes into play beyond some skill point allocation. Can you tell me anything more about the occult force murdering veterans in Arkham?

[Brian Sammons] – No. Sorry but that’s the mystery of the scenario, that and why it is happening. I can’t give that away. Well, I guess I can safely say that the themes of loss, sorrow, and rage play a part, but I really can’t divulge more than that.

Question 3: Brian, you are no stranger to Arkham (having written “Consumption” for Golden Goblin Press’ Island of Ignorance). Is there something particular about the town that attracted you or was it used because it is already developed and an easy place for Keepers to utilize? 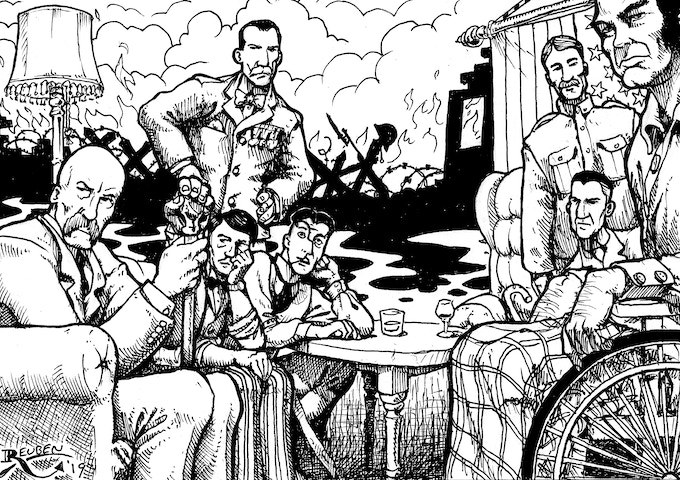 [Brian Sammons] – I think it first comes from my love of Lovecraft’s fiction and I like doing new things with his established settings. Like “Consumption,” for example, or something I did some years back set in Red Hook, “A Restoration of Evil.” I also think Arkham is a great town to set a Call of Cthulhu game in and it is my favorite sandbox to play in when I run games for my players. Last, I think adding a VFW hall to the town and dealing with the veterans Arkham must have adds to the setting. Or at least I hope it does.

(Just a note to mention that Arkham does have a home for disabled veterans (A601 – the Miskatonic Valley Veteran’s Home, which includes some vets from the Great War among its residents.)

Question 4: Further afield there is also a scenario set in Maine – “They Are from Away”.  There haven’t been many scenarios set in Maine, despite its proximity to “Lovecraft Country” (and appearing in some of Lovecraft’s stories).  Can you tell us anything more about the “inexplicable and unnatural events begin to occur, aimed at humiliating and terrorizing the area’s Catholic citizens”.

[Oscar Rios] – Picture what would happen if the Ku Klux Klan took over the local government and one of them knew a fair bit of Mythos magic. They then use this knowledge to augment their typical campaign of cross burning, intimidation, and outright terrorism of Irish and French Canadian citizens.  Wish I could tell you more, but the scenario is still being written and I haven’t read the first draft yet.

A little bit later I got an update (tied onto the foot of a raven, oddly enough) from the mysterious Dr. Gerard himself: 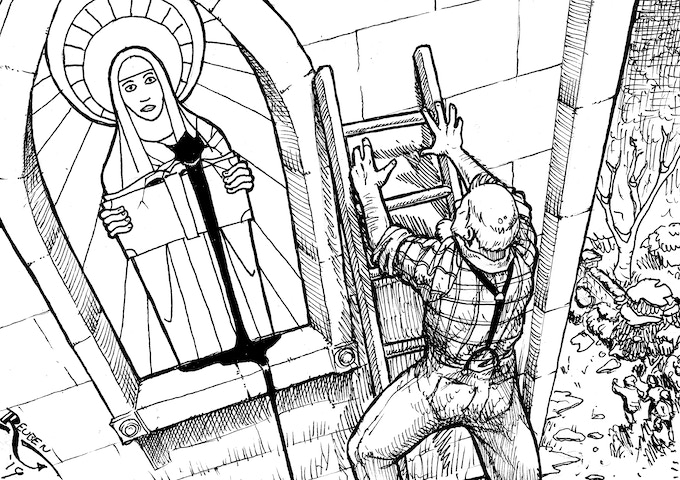 [Charles Gerard] – I’ll have to dance around spoilers here. One of many time-worn pages from the bigotry playbook is to portray someone else’s religion as superstition. Fear of a group is easier to sow when you can persuade people that the group’s beliefs are deviant, amounting to idol worship or a dangerous occult art. Now, let’s say the people sowing fear stumble upon the forces of the Mythos and see an ally in them.

Question 5: You’ve also mentioned a stretch-goal scenario “The Blood Red Mill” by Scott David Aniolowski, which is also set at Arkham, at Miskatonic University in particular. What, if anything, can you tell us about that one?

[Oscar Rios] – This story begins with the suicide of a student who was recently outed and expelled from Miskatonic University for being a homosexual. This is based in actual history, as groups of professors would form secret courts at Ivy League schools to investigate suspected homosexual students and then try to find ways to both expose and expel them.  In this case there are repercussions, and a string of grisly murders begins taking place. It’s a tale of human tragedy and revenge with a dash of European fairy folklore given a strong Mythos boost.

Question 6: Can you or your authors recommend any of the works, books or otherwise, that have inspired their creations?

Question 7: Is there anything else you think Sentinel Hill Press fans would want to know about this project?

[Oscar Rios] – A lot of people are thinking that this book will be light on Mythos horrors and focus more on the terrible social issues they touch on. That is not the case.  Each and every scenario is a dark, mature themed cosmic horror investigation, woven together with one or more variations on mankind’s inhumanity to man. These are intended to be powerful scenarios, that deal with difficult themes, which will stay with your player for years to come and spark deep conversations about issues that plagued this nation in the 1920’s, and which still do today.

I’d like to thank the gang at Golden Goblin Press for taking the time to answer our questions.  All of the illustrations come from the Kickstarter page and were created by Reuben Dodd.  I’m glad to say the Kickstarter has reached its funding goal and is moving on through its stretch goals.  I look forward to seeing these scenarios, Lovecraft Country and otherwise, when the book is complete.