Last week, Golden Goblin Press launched their latest Kickstarter crowd-funding project, a Lovecraft Country scenario collection, updating and expanding Grand Goblin Oscar Rios’ “Lovecraft Country Cousins” scenarios, two of which originally appeared in Chaosium monographs in 2005 & 2006.  The project funded in two days and has hit the first two stretch goals, as of the time of this writing.
Here’s the promo video:
This project (which includes a companion fiction book) definitely overlaps with the Venn  diagram of Sentinel Hill Press’ (and I suspect our readers) areas of interest so I thought we might fire up the Q&A machine and launch an some queries Oscar’s way to learn more about the project.  We chatted, via email, and I’ve reproduced our Q&A below; contents edited for clarity.  (As a note, I am a backer of the campaign, though not a contributor.)

1. What was the genesis of this project? What inspired the first Lovecraft Country kids scenario, “Halloween in Dunwich”?

I think for me it all started with the childhood and the utter joy of Halloween.  I have fond memories of Boy Scout trips to pumpkin patches, haunted houses, and scary TV specials and movies.  Halloween is never so special, or so scary, when you are a child, especially in those preteen years.  You are young enough to enjoy everything child-like about the holiday, but old enough to understand it’s dark origins and the themes it represents.  A lengthening night, times of approaching darkness, and struggle, and death. As a kid in Queens New York, long island seemed like “the country”, a mysterious distant Dunwich of my youth (I was rather sheltered and not well traveled).  I remember going off with friends from the main group to explore the most distant reaches of the pumpkin patch and feeling like we were having a real adventure.  It was that feeling I was trying to capture when I wrote “Halloween in Dunwich”. 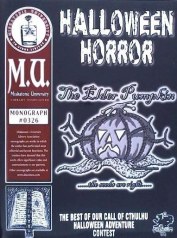 w will the two previously published scenarios differ from the original monograph versions?

Oh, they are both being totally rewritten, expanded and converted to 7th edition.  They may have new scenes, but they will have a lot more detail, all new art and some proper maps.  Also the characters are getting portraits and upgraded to 7th edition as well.  I won’t be making major plot changes, as I feel both work well as they are.  However, I am planning to make them much richer, deeper, and more satisfying than their original versions were.

3. What adjustments do you have to craft a scenario with child-investigator

For the characters, I looked at the age modifiers and I followed the trend backwards once.  While adolescent investigators get fewer skills and lower stats, they also get much higher LUCK scores.   I think players are going to have fun using that to their advantage. For the scenarios themselves I’ve tried to make the physical danger lower, but enhance the sense of foreboding and horror more.  Adolescents feel things very deeply, and fear can be quite acute.  The scenarios also tend to be more mystery solving than monster hunting, with the real challenges the investigators face being puzzle solving and moral dilemmas.

4. Were there specific people who inspired the six cousins?

The cousins tend to be the Lovecraftian and child archetypes in stories. The sporty kid, the bookworm, the farm boy, the tough girl, the spooky weird kid, and the completely spaced out girl.  For direct inspiration the character of Gerdie Pope loosely based on a dear friend I lost contact with ages ago, named Chris Pope. Of course, many of the NPC’s are inspired by friends and actual family members growing up, most notable my own Cousin Melba, who once babysat for my sister on me at Christmas time and made holiday cookies with us.  That day was the direct inspiration for “Christmas in Kingsport”.

5. Was there any guidance given to the fiction collection’s authors regarding theme or topic?

Yes, a great deal.  They were each given full and detailed descriptions of each character before they made their picks. In one case a bit of previously published fiction too, as “The Nature of Faith” from Cthulhu’s Dark Cults features a grown-up version of Gerdie Pope. Each author took this challenge to heart and had fun telling stories about someone else’s characters.  For the stories already turned it they did an amazing job making these characters live and breath for me in a whole new way.  It really captured the spirit of the shared universe of the Lovecraft Circle.  For myself, I took on the task of telling a story set in Innsmouth featuring Alice Sanders.

6. You have a stretch goal scenario – “Easter in Arkham” wherein…

“The cousins fall into a mystery when recently departed pets begin returning to their owners, but changed, tainted, and unstable. As tensions mount over reports of a strange new disease affecting the pets of Arkham, drastic measures are proposed to protect public health.”
Are there any other details you can share about the scenario?

This scenario will be set across Arkham, and the children will be moving between locations on bikes. Bikes for kids have been a thing for almost a decade by this period.  Recently deceased pets from across Arkam are returning to their homes, in various states of decay and mental stability.  Some are dangerous, others are not, all are tragic, lost figures. The kids must figure out what is happening and stop it, before things escalate out of control.  The authorities will soon order all pets in Arkham be destroyed fearing some sort of epidemic.  The press calls it some sort of new rabies, so as not to cause a panic. The real escalation is in the focus of these resurrections, as pets are only the first step in a much larger, and darker, part of the culprits plan. There are some lines that should never be crossed.  Basically the cousins will face life, death, and loss in the painful way only an adolescent can truly feel, when we all begin to learn about, and fear, death.  It also deals with the core theme of Easter, being resurrection and rebirth.  I’m really looking forward to working on this one.

7. How about the other stretch-goal scenario “Innsmouth Independence Day”?  (I’ll note that Revolutionary War Memorial on the Old Church Green I104) has been decapitated and badly damaged; the Innsmouth branch of the DAR has really fallen down on the job. )

This will be slightly different than the others.  In those cases the cousins fall into trouble.  In Innsmouth Independence Day the kids go looking for it.  Like Easter in Arkham it deals with the holiday theme, rebellion and freedom.  Alice Sanders, our Innsmouth resident, is about to start high school.  She feels that people look down on her, and thinks that if she could join the prestigious social group, The Daughters of the American Revolution, it would elevate her socially.  To do that one must prove that you had a relative who fought in the American Revolution.  Alice has been told that several of her ancestors fought as privateers in support of the Continental Congress, but for some strange reason her family won’t allow her to have access to her genealogy records.  She does know where they are supposed to be kept of course, in the supposedly haunted abandoned mansion of her Great Grandmother Zenobia Sanders. She enlists the help of her cousins to recover them, and they plan to sneak away from the family’s July 4th celebration to do so. However, they find more than just records and ghosts at the mansion, and learn far more than they bargained for, especially about one of their own.  The cousins will have some hard choices to make, fitting for the climax to the holiday collection.

They are perfect New England archetypes, the college town, the resort town, the seaside slum, and the rolling rural backwater village.  Any story worth telling can fit in one of those four iconic places.  To me Arkham, Kingsport, Innsmouth, and Dunwich are the four corners in calling Mythos horror.  Earth, wind, water, and fire, so to speak.  They are just naturally compelling locations.  I have well-worncopies of Return to Dunwich, Arkham-Unveiled,Kingsport – The City in the Mists, and Escape from Innsmouth.  I throw Miskatonic University {2003} on that pile too, just for good measure.

9. Is there anything else about the Kickstarter you want potential backers to know?

That this is their project as much as it is GGP’s.  Some backers have the chance to be written into the books as best friend to the six main cousins, via our BFF backer level.  How far and how detailed these books become is also up to them, as we have plenty of stretch goals planned.  Also, I think that Lovecraft country is such a wonderful setting that too many players, especially the newer once, may not know that well.  It’s time for us all to go back to our roots and origins, and visit theses places once more.  How better to do that than seeing them through the fresh eyes of six children growing up in these eldritch locations?

Thanks for taking  time to talk with us, Oscar.
If you want to know more, Oscar was also interviewed by the Legends of Table Top about the project: