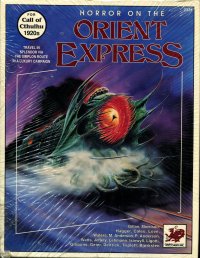 At my High School graduation I won a small writing prize which was wholly unexpected but pleasant surprise.  I took the prize money and splurged on the biggest RPG book I had ever seen : Horror on the Orient Express.  I had already picked up a copy of the Call of Cthulhu rules so obviously what I needed next was a complex, continent-spanning campaign for experienced Keepers.  I loved it and couldn’t wait to run it as soon as I could (which I would do a year later) but in the mean time I’d read some other books to help get ready, even tracking down a used 1927 World Atlas or a Blue Guide to London.  It was a lot of fun that left a lasting impression on my approach to Call of Cthulhu writing – focused on historical research and tracking down useful additional reading material. 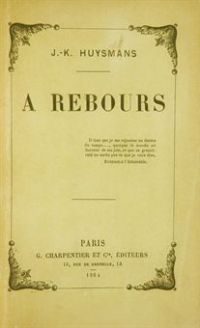 Now, however, is the time in the parade of Book-tober readings, we get to something I didn’t like – and that was the novel À rebours by J.K. Huysmans.  One of the major NPCs in Horror on the Orient Express is the Duc Des Esseintes.  In passing the authors noted that he was inspired by the main character in this novel.  Having found the NPC somewhat hard to wrap my head around (power-hungry Turkish cultists I got, ditto irate ghosts and alien reptiles) so I marched over to the campus library and checked it out.

Wow, I really did not enjoy it.  I had no sympathy for des Esseintes nor could I find any.  You would think a slightly (“slightly”) pretentious 19 year old would really enjoy a self-involved neurotic loner angry at the world and desperate for anything to bring some hint of pleasure.  Not me.  I just wanted him to shut up or find a hobby or maybe see a therapist.  Out of a sense of obligation I forced myself to finish the book, hoping I might find some inspiration for the character in the campaign, since he played so important a part, but it was very much a slog.  I’ve forgiven Mark Morrison et al since I liked so much else of what was in the book, of course.

Later, when I ran the campaign, I ended up playing the Duc as a smug and insufferable asshole.  When my players managed to trip him up and effectively kill him during their first encounter, I decided to revamp the campaign’s plot and omit his set return in a later chapter and instead replaced him instead with a certain lady that they encountered in Yugoslavia.  I liked her a great deal more and found her far more enjoyable to expand her roll in things.

Oddly enough in 1992 one of the albums I had on heavy rotation was Bad Religion’s Against the Grain, which is one of the sometimes used translations of this book’s title.  Perhaps I would enjoyed this book more if it has been only 2 minutes and a couple seconds long.