There are two scenarios scheduled to appear in Arkham Gazette #4 we have available for playtesting:

The Bones of Contention

A skeleton found in the basement of an old home is the first link in unraveling a centuries-old mystery in mist-shrouded Kingsport.  Strange-goings on in the place, dubbed by the newspapermen as “The House of Old Bones” suggest that something more than human fragments lingers there.

This scenario, written by Kevin Ross, can likely be run in a single night and works best for 2-3 player but can be run for a single player.

A Dancer in Sea-Mists and Star-Winds

Kingsport is know for strange sightings but recently something is moving abroad in the night fogs… some say they see a woman, others say curious musicians, still others, something not wholly human.  Whatever it is, it seems to be spreading sickness and madness in equal measure.  Sit close by the fire and drive off the damp – otherwise you may catch your death…

This is a longer scenario, written by Christopher Smith Adair, is for 3-5 players and will likely take 2 or 3 sessions of play. 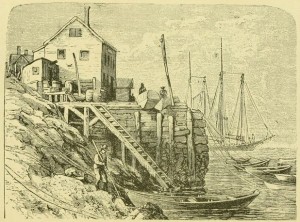 Kingsport, a village of fishermen

Both scenarios are more investigative than combative, focused on mood and atmosphere rather than pulp action, made for Kingsport’s foggy streets, fishermen, artists, and dreamers.

We are looking for a group that can play and report back on the scenario no later than the end of June.  For more information, contact us at ArkhamGazetteMagazine@gmail.com; please include the word “PLAYTEST” in the header.